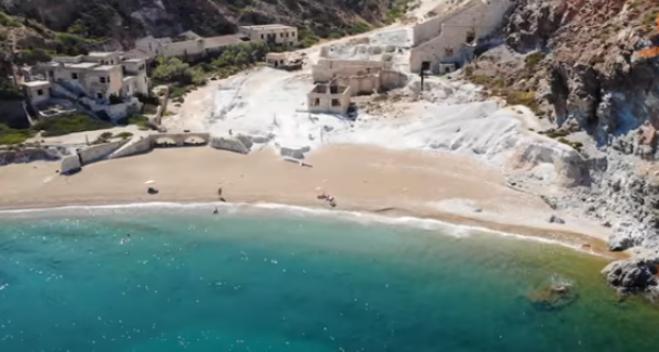 Taking a walk in the sulfur mines of Milos is like taking a trip back in time, while you really feel that you are walking on a historically preserved site, an important example of the industrial heritage of the whole of Greece. Friend Marinos Charalampopoulos takes us on a tour.

From ancient times the exploitation of sulfur for the purpose of polishing metals, disinfection but mainly antiseptic and therapeutic purposes, led to the development of the extraction of this mineral. The area of ​​Paliorema of Milos, was an important place for the extraction of sulfur, while many Athenians were the ones who took advantage of the sulfur of Milos, making "turtles" of sulfur intended for trade.

In recent years, in the year 1862, the concession of the exploitation to individuals began, the main ones being the "Hellenic Society of Public and Municipal Works" but also the "Milos Sulfur SA", while in 1958 it was abruptly stopped, when the sulfur became a by-product of oil refining, at a particularly low cost. The company closed permanently in 1978. Until then, most of the production was exported to France, mainly for spraying the vines, while a total of 125,000 tons of ore were mined and transported by wagon to a crusher for crushing.

These old interwar facilities, the mining galleries, the ruined offices, the tools, the loading ladder and the old buildings where the workers lived, are visible to the visitor today, testifying in their own way the difficult working conditions mainly due to the high temperatures and lack of air, but trained generations of craftsmen who later manned many of the island's mineral processing plants.

Over the years, rust and sulfur have created a wonderful spectacle of colors, leaving their mark on this desolate place, which, unlike all, remains a living part of the modern history of Milos.

As for the beautiful blue beach with the white-yellow sand that stretches in front of the sulfur mines, it could not be otherwise ... simply continuing the "tradition" of the impressive beaches of the island which is an ideal destination for thousands of visitors every year.