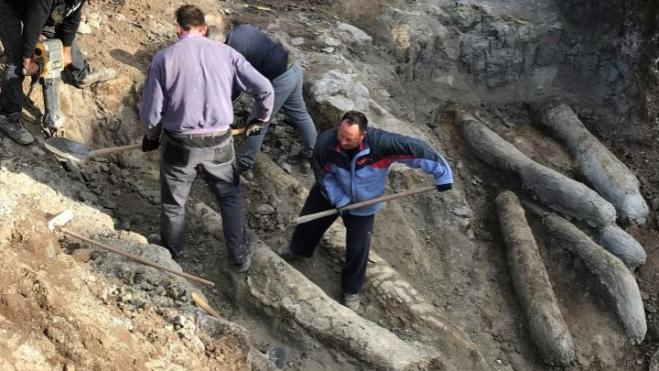 Some 50 fossilized tree trunks have so far been brought to light at the island of Lesvos' Petrified Forest, near Sigri, during ongoing excavations that continued until New Year's Eve, Professor Nikos Zouros, Director of the Petrified Forest of Sigri Museum, told Athens-Macedonian News Agency (ANA-MPA) on New Year's Day Friday.

The number of the fossilized trees and their location -first discovered in November at the eastern part of the excavation site- have revealed significant information about the multi-layered fossilization process, and the magnitude of volcanic eruptions that shaped Lesvos' natural landscape, he noted.

"It must have been a cataclysmic event of gigantic proportions and violent intensity," Zouros pointed out, "covering Lesvos in volcanic ash some 18 million years ago."

"We haven't come across such ample evidence of a large-scale volcanic explosion and pyroclastic flows since the 1980 eruption of Mount St. Helens at Skamania County in Washington, USA, when it obliterated the Sequoia forest there," he observed.

When the excavation team first stood above the then newly excavated 14 trees back in November, they were not yet aware that they were standing right above another layer of fossilized trees, underlined Zouros. Both small and large, the trunks include conifers and fruit-bearing trees, and have formed layer upon layer of petrified vegetation zones, ultimately revealing the morphology of the island's landscape.

The newly discovered fossilized trunks provide many interesting facts about the location of the volcanoes, and the origin of the volcanic materials that covered local vegetation. They also provide significantly more information about the severe force of the volcanic eruptions during the Lower Miocene era in the North Aegean, and the ancient climatic conditions in which the silicification process of plants followed, thus creating the Lesvos Petrified Forest.