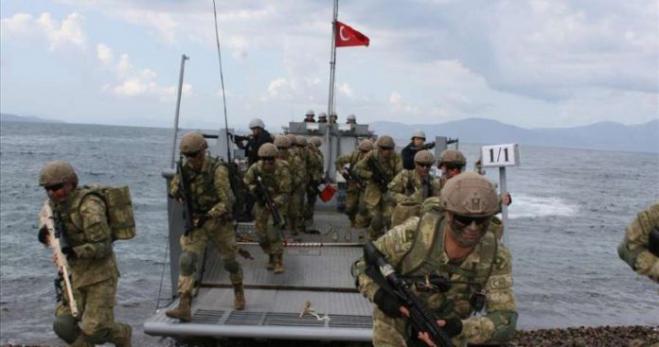 The Turkish military threat focuses on the many small islands of the eastern Aegean. Some of them are located further west than the large islands and are therefore the least vulnerable and will not concern us at this time. The small islands near the Turkish coast are an easy target for amphibious operations in order to create a fait accompli.

Ankara claims 152 small islands and islets as "Turkish". "Greece only has a de facto rule of sovereignty over the islands called EGAYDAAK and its administration there does not negate the fact that these islands are territory of the Turkish Republic," Turkish Foreign Minister Cavusoglu told the National Assembly in 2018.

The acronym EGAYDAAK (Egemenligi Anlasmalarla Yunanistan'a devredilmemis Ada Adacik ve Kayaliklar) denotes islands and islets whose ownership (according to the Turks) was not granted to Greece by agreements. In case of conflict, the main targets will be on the one hand the Kastellorizo ​​complex (due to distance and EEZ), on the other hand, the 152 EGAYDAAK.

Many of them are uninhabited, arid, and deprived of tall flora, which is not suitable for defense. The same goes for anyone who lands on them. The attacker may easily take them, but he can not stay on them unless he is willing to make superhuman efforts to support them. In addition, uninhabited islands can receive a hail of naval and air strikes, as well as artillery fire from nearby larger islands, without fear of inflicting friendly losses.

Read the rest of the article here