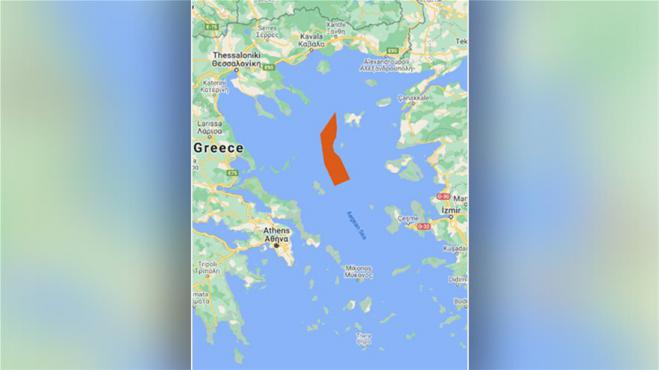 The ship of the Turkish navy "Cesme" has been sailing in the Central Aegean, since Sunday night, where hydrographic surveys will be carried out until March 2.

As of Monday morning, Cesme has completed 12 hours of continuous voyage within the search area defined by the illegal Navtex 0122/21 issued by the Izmir coastal station. According to protothema.gr, the Turkish vessel Cesme is located in the northern part of the research area, which is depicted on the map.

Cesme, that is, is moving between Lemnos and Agios Efstratios. In international waters, but in an area where the only competent authority for licensing research in the water column is the Greek government. Without any kind of permission from Athens, the ship of the Turkish navy is inside the area where the hydrographic surveys have been announced.

There are no warships near the Cesme, neither from the Hellenic Navy, nor from the Turkish fleet. The Turkish hydrographic ship is discreetly monitored by a vessel of the Hellenic Coast Guard, to which the mission has been assigned.

The Turkish hydrographic ship Cesme moves at a low speed of about 5-6 knots. Winds of about five beauforts are blowing in the area. There is no confirmation from the Ministries of National Defense and Foreign Affairs whether the Turkish Cesme is actually carrying out hydrographic research and what kind of specific work it is.