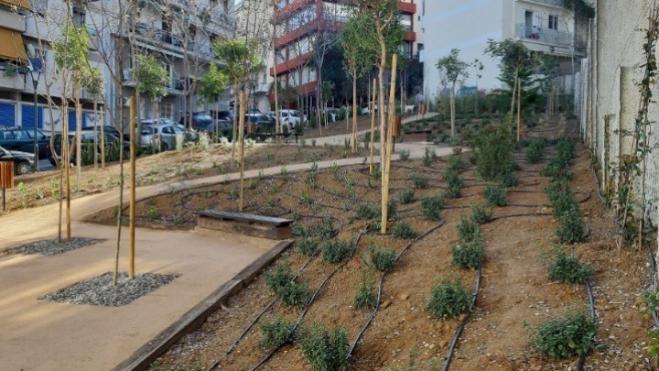 acquired a third "Pocket Park" - a green space in a dense urban setting, this time in the neighborhood of Pangrati - after those of Kypseli and Kolonos.

At 750 sq.m. of an abandoned plot of land, the Pangrati park is larger than the other two and was developed by the P&G company and the organization "Gi" (Earth), both participating in the City of Athens program "Adopt your city".

It now contains a total of 1,150 densely planted trees, including robinias (locust trees), birches, and native herbs. "The impressive number of different plants and their density contribute towards an ecosystem with benefits for the neighborhood," a statement by the city said.

The principles used, the city said, focused on designs and construction of a viable nature and a cyclical economy. For example, most construction at the park used old railroad cross-ties, while a sustainable draining system draws excessive water, enriching the water table and watering trees.

Lighting is provided by independent photovoltaics, which collect solar energy and provide lighting with reduced glare through the the following morning.
In addition, the park has walking paths, benches and bicycle racks, and contains water sources ror visitors, birds and small animals.

Mayor Costas Bakoyiannis expressed the hope that such mini-parks will replace garbage plots and turn sections of the urban network that have become a burden to neighborhoods into "small green reference points."