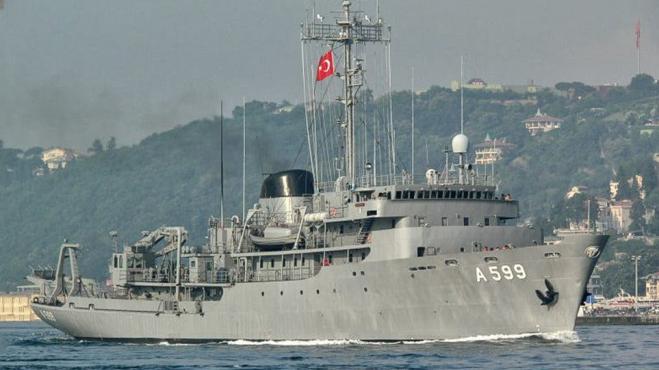 For many months, the Turkish regime has done everything to show even the most conscientious Europeans that it seeks to put pressure on Greece, to the point that Athens' only choice will be to react.

Oruc Reis vessel conducted seismic surveys for four months in an area between Rhodes and Kastellorizo, where Greece has sovereign rights in the maritime zones.

The attempt to create tension with Cesme

And while the Turks were persuaded by the Europeans and the United States to sit down again at the table of exploratory contacts with Greece, with the voyage of the Cesme research ship in the Aegean, Ankara has shown that its objective remains to provoke tension in the Aegean.

The Turkish navy ship Cesme began researching in the Central Aegean on Sunday (February 21st), based on the Navtex of the Izmir coastal station, from February 15th. These are illegal searches because they were licensed by a Turkish authority that has no legitimacy to approve searches in the middle of the Aegean, even if it is an area in international waters.

After bypassing the Greek authorities, after deciding and ordering Cesme to start explorations in the water column between Lemnos, Agios Efstratios, and Skyros, the Turks went so far as to demand the cessation of the training activities of the Greek armed forces in the Aegean for that Cesme is investigating illegally and without permission between three Greek islands!

In fact, on Tuesday afternoon, the Turks protested in the strongest degree for alleged harassment of Cesme by four Greek F-16s which - in Ankara's view - reached two miles from the Turkish navy ship, allegedly throwing chaffs, ie which are activated during air battles as countermeasures to blind the radar of the enemy fighter.

The alleged issue of Cesme's harassment was made public by the Turkish state news agency Anadolu, and shortly afterward Hulusi Akar rushed to denounce Athens, assuring that Ankara had taken appropriate measures.

What really happened with the Greek F-16 and the Cesme

As was revealed, reality is once again diametrically opposed to the claims of the Turks. The Greek Air Force conducted an exercise in an area from Halkidiki to Skyros based on NOTAM issued on February 9th. And the alleged harassment of Cesme by four Greek fighters, more than anything resembles a fairy tale.

The closest point that the Greek fighter jets flying at 19,000 feet reached was 10 miles from Cesme! Even the American aircraft carriers do not have as much of a no-fly zone around them as the one demanded by the Turks to be created around Cesme! It is a mystery where they saw the harassment of the Turkish ship in Ankara, when the Greek fighters did not approach closer than 10 nautical miles from Cesme.

The Ministry of National Defense, in response to the Turkish allegations of harassment of Cesme, clarified:

The exercise of the Air Force with the participation of 29 Greek fighter jets took place from 13:30 until 14:40 on Tuesday. NOTAM (A0350 / 21) was issued for the Greek drill activity on February 9, 2021, while the Turkish illegal Navtex was issued on February 15. Indirectly, the Turks demanded the cancellation of a Greek training activity that had been announced six days before the issuance of the irregular Turkish advertisement to seafarers for Cesme's investigations!

The exercise of the 29 Greek fighters was carried out between Ag. Efstratios - Kyra Panagia islands and south to Psara while throughout the exercise the Turkish Cesme sailed on the north side of the area described in Navtex 0122/21 west of Lemnos.

The nearest Greek aircraft trail I was flying at 19,000 feet was 10 nautical miles from the Turkish ship. How is it possible for Ankara to claim that Cesme was allegedly harassed by Greek F-16s?

Greek fighter jets did not carry chaff or flares.

The Turks, once again try to do black and white and try to appear as victims. At a time of de-escalation and reconciliation through exploratory contacts, they sent a Turkish navy ship for hydrographic research in the Central Aegean, just seven miles from Lemnos and Agios Efstratios, without having requested or secured a relevant permit from the Greek authorities.

They also demanded the cancellation of a Greek training activity that had been officially announced through a Notam six days before the irregular Navtex was issued for Cesme's research! And even more indirectly they asked for the creation of a no-fly zone around Cesme at a distance of more than 10 miles from the Turkish research vessel!

What else but the Turkish regime's dreams of ownership of the Aegean, which Erdogan perceives as part of his supposed blue homeland, all reveal?