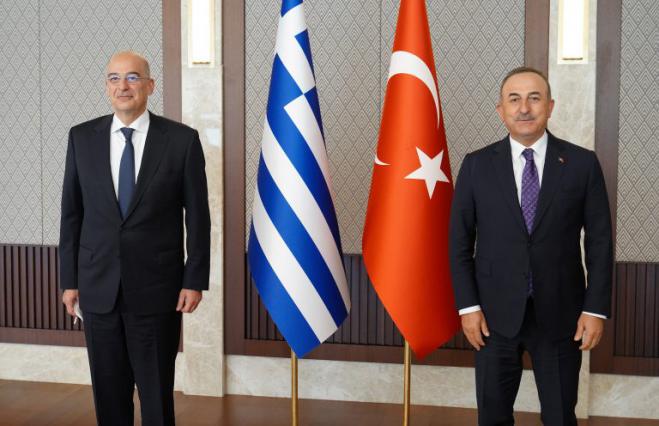 Although the "hot incident" between Foreign Ministers Dendias and Cavusoglu was surprising in terms of its intensity, it is not an exception in terms of the way in which the public debate between states is sometimes conducted.

After all, US President Joe Biden recently did not hesitate to call his Russian counterpart Vladimir Putin a "murderer". Not to mention the way his predecessor Donald Trump behaved in international meetings. And of course from the Russian side Sergei Lavrov has lately also shown that he does not mince his words, e.g. when referring to the European Union.

As for the Turkish side, Recep Tayyip Erdogan himself has used public controversy in various ways with the most typical example being the famous "one minute" in Davos in 2009 and his confrontation with Simon Peres on the issue of Israel and the Palestinians.

However, to consider that the tension during a joint interview of two ministers is merely a symptom of a shift in "ethos" from what is considered acceptable "diplomatic" language is probably not enough to understand what happened in Ankara and the context in which it took place.

Registering the unwavering positions of the two countries

A first necessary remark is that what we saw exactly mirrors the Greek-Turkish dialogue. That is, we saw on live television what is usually said behind closed doors.

And this means that Turkey insists on its own reading of international law and the law of the sea in relation to the continental shelf and the EEZ, which does not recognize an independent continental shelf and EEZ for islands but only for the mainland, hence the imprint of this point of view in the Turkish-Libyan pact.

Ankara has also insisted, since the 1970s, that the Treaty of Lausanne was unjust to Turkey. Turkey has also not abandoned the casus belli in the event that Greece applies its right under international law to extend its territorial waters to 12 n.m. It also still questions the right of Greece to defend the territorial integrity of the Aegean islands with the presence of the armed forces.

Turkey also considers that it has a say concerning the Muslim minority in Thrace. It maintains that there are "gray zones" in terms of the status of islets and small islands in the Aegean. Ankara argues that the Cyprus issue must be resolved in the direction of a "two-state" solution. It insists that while Turkey itself hosts millions of refugees, Greece is making illegal push backs.

And of course Turkey throughout this period, has never abandoned its firm position that a Greek-Turkish negotiation should be "substantive" and not just focus on the issues of the continental shelf and EEZ, as the Greek side insists.

For its part, the Greek side insists that the main difference is the issues concerning the delimitation of sovereign rights in relation to the continental shelf and not issues of pure sovereignty (even if sometimes the Greek side sets the tone for a comprehensive discussion). That the choice of militarization of the islands was a forced response to the Turkish threat. That Greece respects the rights of the Muslim minority as well as refugees and that it obviously considers international law as a starting point. That it wants a solution to the Cyprus problem on the basis of UN decisions on a bi-zonal, bi-communal federation.

The timing of dialogue

At the same time, it is important to see in what context this dialogue is beginning.

On the one hand we are at a special juncture in terms of the evolution of modern Turkey. The "Erdogan era" has led to a narrative that sees Turkey as a strong regional power that must be respected. Apart from the ideological dimension, this also reflects real dynamics. Turkey is actively intervening in a number of geopolitical tensions: it has a presence in Libya, it has invaded Syria (with the tolerance of the US and Russia), it has intervened in the Armenia-Azerbaijan conflict, it is opening up to Africa, it is even claiming to intervene in the Russian-Ukrainian conflict. At the same time, it is clear that Ankara is "reading" the global situation as an emerging "multipolar" network in which, without severing ties with the "West", it is laying stake to exploit the rifts that are emerging in the international landscape.

At the same time, Turkey does not want to be cut off from Europe and the West in general (indicative of the hostility inside Turkey towards the "Eurasianists" and for this reason it wants to show at the same time that it "imposes conditions" but also does not refuse dialogue.

These parameters explain why Turkey is moving with a seemingly arrogant self-confidence and using high-pitched rhetoric. It does not avoid challenges, but at the same time wants to show that it does not stand up from the dialogue table, even if its attitude makes it ineffective. It also explains why Turkey's tone for internal consumption was that it was the Greek side that "provoked" it.

For its part, the Greek side is entering into a dialogue to a large extent because it wants to avoid the cost of "hot" escalation. This, after all, was evident from the way in the summer of 2020 "tacitly" modified the rules of engagement regarding the seismic surveys of Turkey in waters that are beyond the Greek continental shelf. It also comes with a given grid of alliances, e.g. it cannot be compared to the time when the issue of Greek decisive "consensus" was raised in an EU accession process that was Turkey’s "national goal". There are, of course, EU threats of sanctions, but it is clear that a number of countries, most notably Germany, will consider "positive" any climate that does not involve a large concentration of warships in disputed areas. Respectively, any efforts to upgrade Greece's relations with countries in the region that are in confrontation with Turkey, may exert pressure, but can hardly have a direct impact on the ongoing dialogue, while at the same developments on fronts such as Syria may also forster new balances.

And all this is taking place in an international landscape marked by the escalation of the "New Cold War", the confrontation between the West and China, the gradual closing of the cycle that opened with the "Arab Spring", the new negotiation around Iran, and of course the questions cocerning the world economy. All of these issues constitute the elements of a transitional era. And transitional eras always give birth to new formations and new fears and temptations to claim "new balances".

The difficult steps from here on out

Both sides do not want the dialogue to end here. This is evident from the fact that the exploratory ones were not at stake. This shows the willingness to hold a summit meeting between Mitsotakis and Erdogan. This is referred to by the meeting between Dendias and Erdogan, about which so far we have no information or "leaks", apart from the choice of the Greek Foreign Minister himself to characterize it as "excellent", a fact in itself important.

Turkey understands that at this stage it is one of the guarantees it must give to the West in order to maintain degrees of freedom in other areas, but also not to risk in the medium term simply finding itself with baseless demands. Greece, although it would like to place more emphasis on its economic and social reconstruction, needs a mechanism that prevents the possibility of "hot incidents" with unpredictable developments and launches a medium-term settlement of bilateral disputes.

However, it will not be an easy process. The two countries come with different starting points, conditions and options and with a correlation between them that has changed compared to the past. Turkey has great internal contradictions, open questions about its economic model and the festering wound of the Kurdish issue. However, Ankara believes that it has been strengthened in the last two decades. Greece maintains its stable position in the West, its European integration, and its new alliances. However, Athens has been injured since the 2010s and is now reconstructing its presence e.g. in the Balkans and essentially seeks to find its pace.

Above all, however, the difficulty for both the Greek side and, in a way, for the Turkish side is that any success of the dialogue means even a partial retreat from the narratives that have been articulated within each country. Either this concerns "we are not discussing anything beyond the continental shelf" for Greece, or "we will force them to respect us as a strong power" for Turkey. It is therefore reasonable to expect several more "warm" joint interviews.