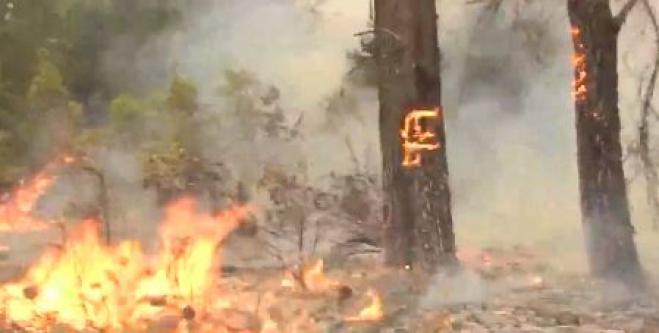 The country is under fire for the third day, with citizens staying awake with fear and despair for another day.

The blaze is burning everything from Attica, Evia, Ilia, while new outbreaks have appeared in Larissa, Messinia, and Fokida.

The fire in northern Attica is in progress and hopes are turning to the aerial means, which began operations since first light. Depending on the direction of the winds, the drops will aim to break up the front, which is huge.

The main fronts are located in Ippokratios Politia, in the settlement of Pontia to the west of Agios Stefanos, while there are many houses in Afidnes and Drosopigi that have been engulfed in flames.

Early in the morning, an evacuation order was issued for Kalentzi, in Marathon, as confirmed by the mayor of Marathon, Stergios Tsirkas. The areas of Kryoneri, Kokkinovrachos, and Afidnes have already been evacuated, due to the huge dimensions of the fire.

According to the Fire Brigade, the flames in Attica, during the night, caused damage to houses in Ippokratios Politia, while there is now a permanent front on the opposite side of the highway, which is mainly burning low vegetation and a few trees, with strong forces trying to prevent the fire from escalating and threatening Kapandriti.

The fury of the fire in Evia

In Evia, the fire reached the beach of Agia Anna. More than 128 citizens left shortly after 1 in the morning with six boats bound for Mantoudi, Evia.

Residents' testimonies speak of houses that were completely burned down.

In a dramatic tone, the mayor of Mantoudi-Limni and Agia Anna asked residents to evacuate all the villages on the east side, noting that "unfortunately the efforts to extinguish the large fronts at Amelantes and Skepasti did not yield results and the fire is uncontrollable ".

The governor of Central Greece, Fanis Spanos, spoke about the extremely difficult situation in Evia on the show Koinonia Ora Mega.

"It is an unprecedented situation. To the south it reaches the municipal community of Kireos. The fire is running very fast both to the north and to the south. It has entered the municipality of Istiaia Edipsos. Both fronts are very difficult. They need air means. The terrestrial ones have been exhausted ", described the governor of Central Greece, Fanis Spanos.

"If we do not have enough aerial means, any forecast can be small. We are not in danger, but the whole place here is burning. We do not know how many aerial means will come," he continued.

"We do not have people in danger, we evacuated quickly. "Many tens of thousands of acres have been burned, the recordings have not been made yet", said Mr. Spanos.

There were three fronts at night in Ilia with the deputy regional governor, Vassilis Giannopoulos, denouncing an organized arson plan.

At the same time, the areas of Elea and Kallithea were evacuated. The fire was directed towards Agios Spyridon and the authorities called on residents to leave their homes for precautionary reasons.

As of noon on Thursday, the fire brigade had ordered the precautionary evacuation of ten communities.

"Aerial means are necessary. The same had happened in 2007. The fire had started from here. We understand the needs of the whole country, but we also need to be protected. We are afraid that the fire will reach the village", said the president of the municipal council of Pyrgos to Mega's television.

Four active fronts in progress in Messinia - Diavolitsi out of danger

"The old front persist and we have two new ones", Deputy Regional Governor of Messinia Mr. Efstathios Anastasopoulos said characteristically.

As he mentioned, there is a fire in Mouzaki, Trifylia that continues burning in a ravine "despite the efforts of farmers and the fire brigade".

And another in Antheia which with the help of the locals, Kalamata and the fire brigade has been limited to 30 acres.

The old ones in Ano Messinia continue. The fronts are many. The fire passed through a village. Three houses burned down. While the fire continues is heading toward to the Community of Dessila.

"The danger has left the big village of the area, Diavolitsi," said the Deputy Regional Governor, while referring to elderly people who strongly refused to leave their homes until the last moment.

"In Ano Messinia the fire has spread to Arcadia. Efforts are being made to control it. The fire department is doing what it can. There are many active fronts. The situation is difficult. "Later it will have strong winds," said Mr. Anastasopoulos, while comparing the current situation with that of 2007, he noted that it is not as dramatic as that year.

A fire that broke out in Sarandaporo, Elassona, is in progress.

The fire is burning a forest area, while ground forces are operating at the spot with 6 water vehicles and 5 pedestrians of the Fire Brigade.

The Municipalities of Elassona and Servia, Kozani, are assisting in the fight to reduce the fire.