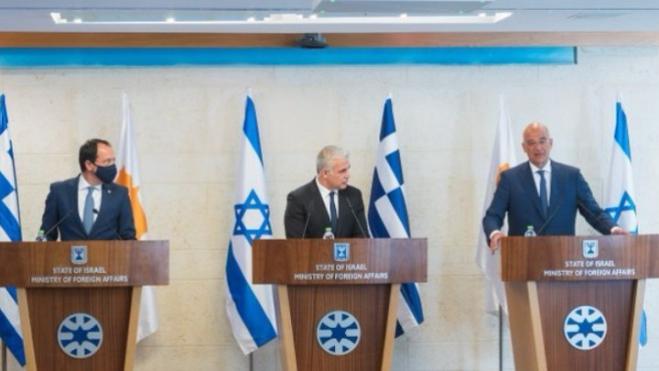 "There are countries in our neighborhood that, even in contrast to the interest of their societies, are trying to revive old empires and old perceptions," Foreign Minister Nikos Dendias on Sunday after the Greece-Cyprus-Israel tripartite meeting held in Jerusalem.
"Literally buried in the sand of the past," he said. "And they use a lot of tools. Military invasions in other countries, interference in other countries' internal affairs. And, of course, sometimes they instrumentalize migration, which is completely unacceptable," he said.

"Our common effort is that they should never succeed," he said.

The Foreign Minister noted that with his counterparts Nikos Christodoulides and Yair Lapid, they examined the extremely worrying developments in the wider region.

"Religious fanaticism, terrorism, fundamentalism that extends from North Africa to the Eastern Mediterranean and reaches as far as Central Asia and Afghanistan," he said.

"The Taliban consider Turkey an ally, they made a clear statement that Turkey is a friendly country. And Hamas congratulated the Taliban."

"The best way to deal with today's problems is with friends, building bridges of stability and prosperity for all, open to all willing countries in Europe, the Middle East, the Gulf and beyond," he said.

The Greek Foreign Minister also thanked his counterparts Nikos Dendias and Yair Lapid for their "solidarity and practical support" in the recent fires in Greece.

The tripartite meeting focused on the ways of strengthening the cooperation of the three countries, starting with civil protection. The aim was also to find new ways to institutionalize the involvement of strategic partners in the tripartite plan.

"We believe that other countries will eventually share the same principles with us and the same values with us," he said.