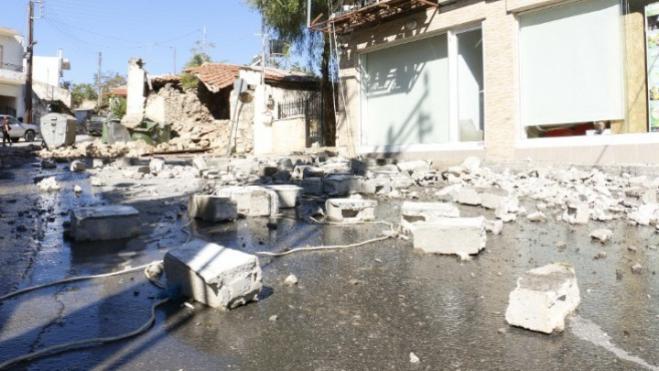 Α worker was pulled out dead from the ruins of the church of Profitis Ilias, outside the village of Arkalochori in Heraklion, Crete, after the roof collapsed on him during the 5.8 Richter earthquake that shook the island.

He was picked up by a National Emergency Care Service (EKAB) ambulance and transferred to a hospital.

Another worker in the same church was freed from the rubble unharmed by the rescue workers.

Meanwhile, another citizen in the village of Patsideros, who was trapped inside his house, was rescued as he could not open the door due to the damage after the earthquake.

There has been significant damage to the water supply system and buildings, in the wider administrative district of Archanes Asterousia on the island of Crete, Archanes Mayor Manolis Kokosalis reported.

Schools have been evacuated, while an inspection has already begun on the condition of the school buildings. All the authorities are on alert, focusing on the area of Arkalochori where there has been significant damage and churches have collapsed.

The quake's epicentre was located 23 km northwest of Arvi and its focal depth was 10 km, the Geodynamics Institute of National Observatory of Athens said.