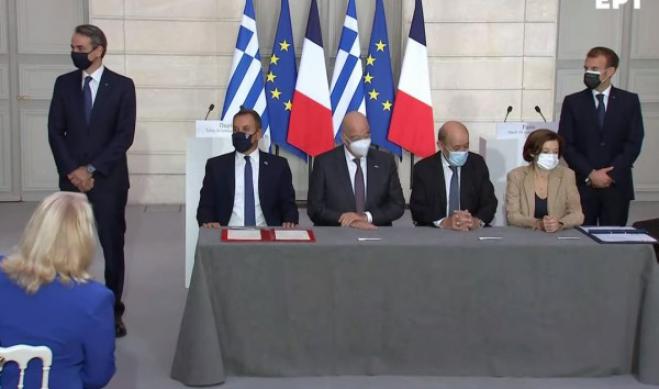 Greece and France proceeded to a strategic deepening of the bilateral relations with high symbolism but also substance, in a move that changes the balance of power in the wider Mediterranean.

The new Greek-French relationship is based on two pillars. One is the strategic cooperation agreement, which was signed by the Foreign Ministers of France and Greece, Jean-Yves Le Drian and Nico Dendia, respectively.

The second is the finalization of the supply of French Belh @ rra frigates by the Greek Navy, which was signed by the Minister of National Defense, Nikos Panagiotopoulos, with his French counterpart, Florence Parley.

What the agreement includes

The two sides have agreed on the purchase from Greece of three Belh @ rra frigates  with an option for a fourth and in fact at the same price as the others (and “locked” for the next two years).

One of the elements of the deal that pundits note is the excellent Follow on Support package that accompanies the procurement, as well as the fact that two of the three frigates will be able to be delivered by 2025 – an element that causes relief to the Hellenic Navy.

This speed is favored by the fact that, as it seems, the three boats will be built at the Naval Group shipyards, untangling the case from the gangrene of finding a solution with one of the Greek shipyards (Skaramaga or Elefsina).

At the same time, discussions include the acquisition of three Gowind corvettes that are an ideal solution for the Aegean.

The background of the agreement

According to “Vima” newspaper, Athens and Paris have again brought forth in recent days – and especially after the talks that Mr. Mitsotakis and Mr. Macron had during their recent meeting within the framework of the Euro-Mediterranean Conference (EUMED9) in Athens- the case of the strategic cooperation agreement.

Undoubtedly, one of the driving forces was the sudden move of the United States to conclude a defense agreement with Australia and the United Kingdom (AUKUS), which led to the cancellation of a colossal agreement for the sale of French conventional submarines to Canberra.

Diplomatic sources spoke of a text that was much better than its predecessors, especially on the point of mutual assistance (where in the past there were some rather absurd references to NATO Article 5 and Article 42 (7) of the Lisbon Treaty). The same sources stated that there are reinforced references to the purely “military part” of the cooperation, but it remains to be seen what final form they will have.

Macron: We want to protect the territorial integrity of both countries

Emanuel Macron was the first to speak in the statements of the French Prime Minister and Kyriakos Mitsotakis about the joint defense agreement between France and Greece.

“We are at a very important time,” said Emanuel Macron. “It is the culmination of our cooperation,” he noted. The French Prime Minister stressed that France is committed to the side of Greece in 2020. This cooperation expresses our desire to strengthen the defense cooperation and security of our states and our common regions, stressed Emanuel Macron.

“We have intensified these discussions over the last week,” he said. “We want to protect the territorial integrity of both our countries,” he said.

In his statements, the Greek Prime Minister spoke of a “historic day for Greece and France because we decided to upgrade bilateral defense cooperation.”

“The signing of the agreement not only reflects, but reinforces, a reality known to all: our two countries have already developed a strong alliance that goes beyond the obligations of each other,” he added.

He added that Greece and France “have ties that permeate common values: the belief in freedom, democracy, the rule of law, human rights.”

“Today’s development is an initiative that responds to the demands of the times because Greece and France are today taking a first, bold, step towards European military autonomy,” he said.

According to the Prime Minister, the agreement paves the way for an autonomous and strong Europe of the future. “A Europe that can defend its interests.”

“In the context of this new relationship between Greece and France, after the 24 Rafale fighters, I announce that our country acquires 3 new French frigates for our Navy with the possibility of procuring one more,” stressed Mr. Mitsotakis.

As he pointed out, there is “national motivation as it shields our country, but it also has a European aspect as it strengthens our common defense industry”.