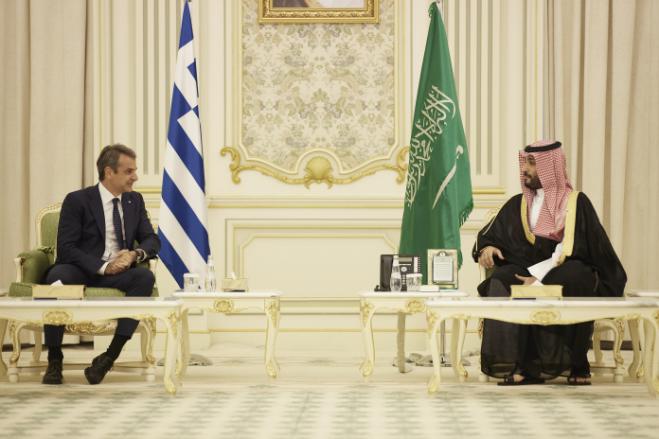 A formal consultations session was held between His Royal Highness Prince Mohammed bin Salman bin Abdul-Aziz Al Saud, Crown Prince, Deputy Prime Minister and Minister of Defense and His Excellency Prime Minister of the Hellenic Republic, during which they reviewed the historic bilateral relations between the two countries as well as joint cooperation and means to support it in all fields. In addition, they exchanged views on the overall current regional and international situations and the efforts exerted for dealing with said situations.

The Prime Minister’s visit was an opportunity to celebrate ties of friendship and cooperation between the Kingdom of Saudi Arabia and the Hellenic Republic, which have been marked by various achievements, as the relations between the two countries are not limited to the political aspect, but extend to include economic, commercial, investment, defense, security, cultural, and tourism cooperation, as well as many other aspects.

During the session, the two sides discussed future opportunities for cooperation between the two countries with the aim of opening distinct fields of economic cooperation, facilitating ongoing interactions between Saudi and Greek business sectors and enabling commercial and investment partnerships within the framework of the Kingdom’s Vision 2030 in order to scale up the volume of trade and investment exchanges between the two countries. In this context, the two sides agreed to examine the possibility of establishing a mutual investment fund. The Saudi side welcomed the Greek private sector’s direct partnership with the Saudi private sector in fields of desalination plants, drinking water, water lines, sewage treatment plants, dams in ongoing and future projects, and organizing commercial activities in the field of agriculture to discuss possibilities of investment in the agricultural, food, fishing and animal industries.

In addition, the two sides highlighted the need to maximize the use of points of intersection in the renewable energy sector, military and pharmaceutical industries and logistics services. Both sides also noted the cooperation established through the Saudi-Greek Joint Committee as well as the founding of the Saudi-Greek Business Council, and urged the relevant bodies in the two countries to implement the agreements and memorandums of understanding signed this year between the two sides and the Saudi-Greek private sectors. Moreover, the two sides agreed to arrange for regular Saudi-Greek investment forums that bring together a number of business leaders and heads of the private sector’s institutions from both countries. In order to arrange for such forums, the Council of Saudi Chambers and the Hellenic Federation of Enterprises (SEV) recently signed an agreement for the establishment of the Saudi-Greek Business Council. Along with organizing forums, the Council’s platform will work on exchanging expertise in the field of maritime training and education, promoting cooperation between maritime administrations in the construction and manufacturing of ships and organizing inter-sea passenger transportation.

In the field of defense and security cooperation, which is considered large-scaled and multidimensional, the two sides agreed to work on raising the readiness status, levels and skills of their military forces through joint military exercises and maneuvers, and to coordinate and exchange military experience in order to achieve security for both countries and stability for the region.

Furthermore, the two sides agreed to work on localizing the supportive technology and military industries. The two sides commended the cooperation achieved in the areas of security and expressed their desire to promote and develop such cooperation in the interests of achieving security and stability in the two countries.

In the culture sector, both countries have been distinguished with their long-standing cultural diversity and the outstanding efforts of the two countries to preserve it and share it with the world.

The Kingdom’s Vision 2030 is based on a new philosophy to revive the Arab and Islamic heritage of the Arabian Peninsula and to enhance Saudi Arabia’s contribution to culture, arts and global civilization. In this context, the two sides stressed the need to explore ways of improving the level of cultural movement and exchange between the two countries. The Saudi side expressed support for the initiative of Greece on the protection of Cultural and Natural Heritage from the impacts of climate change.

The two sides also agreed on the importance of increasing the pace of tourism cooperation between the two countries, working on initiatives for the development of tourism, exploring the tourism features of each country, enhancing communication between the citizens of the two countries, and facilitating the means to achieve such goals. Furthermore, the two sides agreed to strengthen joint action in tourism activities and programs that will benefit the tourism sector and its development, and to coordinate efforts and insights into international tourism-related partnerships.

In light of mutual understanding and cooperation, the two sides exchanged views on the situation in their regions, in addition to political issues, crises in the Middle East and international issues of common concern. The two sides stressed the need for the international community to assume its responsibilities with regard to maintaining international peace and security along with halting all forms of interference in countries’ internal affairs in order to achieve security and stability in the Middle East and the world. In this context, the Greek side expressed appreciation for Saudi Arabia’s great efforts to maintain regional and international peace and security.

The two sides highlighted the importance of all efforts to reach a comprehensive political solution to the Yemeni crisis on the basis of the three points of reference: The Gulf initiative and its executive mechanism, the outcomes of the Comprehensive National Dialogue and the relevant UNSC resolutions, including resolution (2216). The two sides also expressed their condemnation of terrorist groups, drone and ballistic missile attacks on the Kingdom’s territory, targeting its vital installations and civilian objects.

The two sides reconfirmed their strong commitment to international law, security and stability, based on the fundamental principles of inviolability of borders, territorial integrity of sovereign states, including sovereign rights over their maritime zones, in accordance with international law, and in particular the UNCLOS, as well as the obligation of all states to abstain from the use or threat of use of force according to the UN Charter.

Both sides also stressed the need to strengthen the international partnership to combat extremism and terrorism, as they reaffirmed that this dangerous phenomenon is not associated with any race, religion or country, and have agreed to intensify cooperation in combating crime and international terrorism in all its forms.

The Prime Minister of the Hellenic Republic has participated in the summit of the Green Middle East Initiative, and appreciated its positive role in achieving stability and environmental balance as well as in minimizing the effects of climate change, which will in turn bring prosperity and development to the people of the region.

In addition, His Excellency expressed His appreciation for the Kingdom of Saudi Arabia and His Royal Highness Crown Prince Mohammed bin Salman bin Abdul-Aziz Al Saud for the great efforts along with the constructive and distinct initiatives in fields of tourism and climate change .His Excellency also attended the work of the Global Forum of the Public Investment Fund at its fifth session, which discussed global economic trends and the future of the international investment environment.

At the conclusion of the visit, the Prime Minister of the Hellenic Republic expressed his deep gratitude and appreciation for the warm welcome and generous hospitality that he and his accompanying delegation received from the Government and people of the Kingdom.

His Royal Highness the Crown Prince, Deputy Prime Minister and Minister of Defense, also expressed his best wishes to His Excellency the Prime Minister of the Hellenic Republic, and further progress and prosperity to the friendly people of Greece.