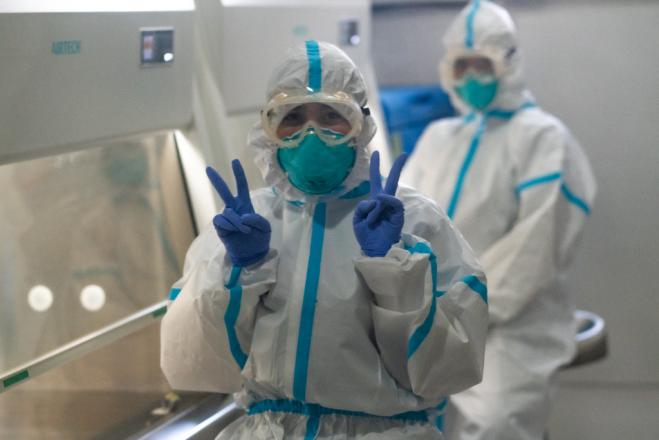 The increasing trend of coronavirus cases continues steadily, a fact that increases at the same rate the hospitalizations, which are now at a critical point.

The numbers from the official data of national public health organization EODY are frightening, since as it appears every ten days, both the cases, as well as the intubated and consequently the deaths, unfortunately increase.

The new deaths of patients with COVID-19 were 38.

The number of new patients admitted to Covid-19 hospitals in the territory was 213.

The number of patients treated by intubation was 351.

On November 1:
The new cases of the disease recorded were 5,449.

The new death rate of COVID-19 patients was 52.

The number of new patients admitted to Covid-19 hospitals in the territory was 249.

The number of patients treated by intubation was 430.

On November 10
The new cases of coronavirus recorded were 7,105.

The new death rate of COVID-19 patients was 70.

The number of patients treated by intubation was 489.

The number of new patients admitted to Covid-19 hospitals in the territory was 429.

The number of patients treated by intubation was 489.

The NHS is at its limits

The above data, which unfortunately, as mentioned above, are increasing dangerously, have brought to their limits the hospitals throughout the country.

Read also: Thoughts on new measures for the unvaccinated - What to do with catering and supermarkets

The exhaustion of the NSS, which suffers from a lack of beds and specific medical specialties in intensive care, anesthesiology and pulmonology, is becoming a critical first-line issue with the only "cure" being the rejuvenation with forces from the private sector.

The private clinics assured that they will meet the needs of the State for additional beds for Covid and other incidents, both in Attica and in all other Regions, when deemed necessary.

The cooperation with the private sector has already started from Larissa and Northern Greece, where 285 beds for covid patients have been added, 19 beds for patients in rehabilitation centers and 85 beds for non covid. In Thessaly, more than 200 beds have been allocated for Covid cases and more than 150 for other cases. But the problem is intensifying daily with new inlets and intubations.

A nightmare in Laiko Hospital

The People's Hospital experienced a terror vigil on Wednesday night. In the clinics there are 25 to 30 ranches, 40 people are in Covid beds, while four patients are treated by intubation outside the ICU because there are no beds available.

The day before yesterday, there were 73 requests for ICU beds throughout Greece, with the 50 requests coming only from Attica. Within a day the requests increased dramatically, which reached 100. Of these, 70 concern Attica.

The tragedy that prevails in hospitals and the lack of beds in the ICU is shown by the death of an intubated patient outside the ICU.

The hospital of Volos is also "collapsing"

The alarm was sounded by Nikos Haftouras, President of Hospital Doctors of Magnesia. According to Mr. Haftouras, the hospital of Volos is collapsing, not being able to withstand the pressure exerted by the explosion of cases.

"The situation remains dramatic. The number of patients has exceeded 110. The hospital is collapsing, but at the last moment there was a mobilization and it seems that something is going to happen. Agreements are made with private clinics. The hospital, however, had decided not to exceed 70 patients with coronavirus, while on duty we had 110 patients. We reached the ceiling. "We have reached a war without soldiers and without ammunition. Ammunition is oxygen," he said.

Commandeering of private doctors if and when…

Now it remains to be seen the attitude that will be observed by the private doctors, with the Minister of Health Thanos Plevris saying that if there is no immediate response, within the next 7 to 10 days, and the positions are not filled or even part of them, then there is a demand for services.

The imperative will concern the areas that are under pressure, not the whole. The Minister expressed the belief that with the good cooperation of the Medical Associations and with the existing planning by the Health Regions, the problems will be addressed.