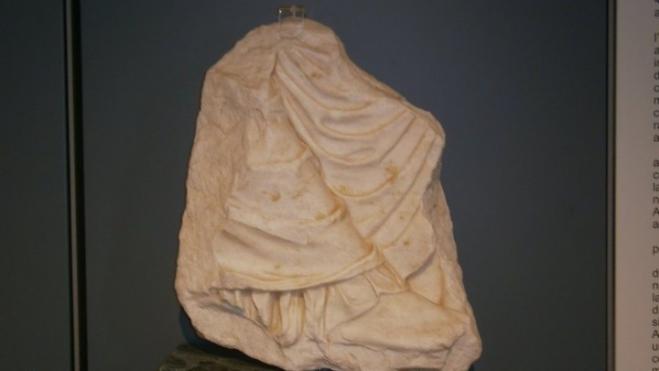 A fragment of the Parthenon frieze will be returning to Greece, on loan by the "Antonino Salinas" Regional Archaeological Museum in Palermo, with a view of permanent repatriation, authorities in Greece and Italy said on Wednesday.

The "Fagan fragment", as it is known, belongs to the eastern frieze of the Parthenon that shows the seated gods of Olympus watching the annual Panathenaic Procession in honor of the city's patron, Athena. The procession included the transfer of a woven veil to Athena's statue in the Parthenon.

Depicted in the "Fagan fragment" are the lower legs of Artemis, goddess of forests and hunting, whose body is depicted sideways.

Greek Minister of Culture Lina Mendoni said that the government of Sicily's move "shows the way for the final return of the Parthenon Marbles to Athens, to the city that created them," and she expressed her gratitude to the Sicilian government and counselor Alberto Samona for "their systematic and legislative efforts, based on the Italian Republic's Code on Cultural Heritage, to have this fragment return to Athens permanently."

The talks for this began in November 2020, she noted, and "overall the intention and goal of the government of Sicily to repatriate permanently this fragment of Palermo in Athens confirms the very long ties of cultural affinity and brotherhood of the two regions, as well as the practical recognition of a common Mediterranean identity. In this context, the Greek Culture & Sports Ministry is very happy to begin its collaboration with the Antonino Salinas Museum, both for the exhibition of very important antiquities from the Acropolis Museum, but for the overall actions and initiatives as well."

Cultural Heritage Assessore and Sicilian Identity Councilor, Dr Alberto Samona, said that through this move Sicily is becoming a forerunner on the issue of returning the Parthenon Marbles to Greece, contributing in key ways to the discussion taking place on global level. As Samona said, "The agreement was signed according to article 67 of the Government of Sicily on Cultural Heritage, which foresees the long-term transport and exchange of archaeological artifacts between the two prestigious museusm, which are under the directorships of Caterina Greco and Nicholas Stambolidis, respectively."

Specifically, he said, according to Italian legislation, the Antonino Salinas Museum "is transferring to the Museum of the Acropolis in Athens for four years, with the possibility of another four-year renewal, the Parthenon fragment that is currently kept at Palermo as part of the archaeological collection of British consul Robert Fagan, which was bought by the Royal University of Palermo in 1820. In exchange, two very significant objects from the collections of the Museum of the Acropolis will come to Palermo, each for a four-year period: an important headless statue of Athens, dated approximately to the end of the 5th century BC, and a Geometric amphora of the first half of the 8th century BC. The agreement also foresees joint initiatives that will be implemented by the collaboration of both museums on issues of cultural interest of a global scope."

Samona confirmed that Sicily wishes "the permanent return of the fragment to Greece" and revealed that besides promoting the mutual development between the two museums, the Region of Sicily has requested that "the Italian Ministry of Culture initiate a process that leads to the successful outcome of this possibility: the process has begun and the issue is under discussion in the context of the Committee for the Recovery and Restitution of Cultural Heritage drawn up at the ministry."

This return to Athens of a significant object of the Parthenon is part of building "a Europe of peoples deeply united with Greece, both carriers of ancient and universal human values." In addition, Sabona said, "the multiple signs of Greek culture found in Sicily confirm that our ties are inseparable and deep."

Acropolis Museum General Director Nicholas Stambolidis said the "Fagan fragment" is one of the oldest dispersed pieces of the Parthenon sculptures, almost as old as those that Lord Elgin took to England in the beginning of the 19th century. The way the Sicilian authorities handled the return of the fragment to the Museum of the Acropolis and initiated the return of the fragment with the Italian Ministry of Culture for its permanent residence in Athens is also important, proving the cultural relations between Greece and Sicily, and a model of how other European countries will move ahead to return parts of the global monument of the Parthenon.

"Antonino Salinas" Regional Archaeological Museum Director Caterina Greco expressed "the greatest satisfaction" for the successful outcome of a target she said she had set on her arrival at the museum's helm two years ago, and said the piece was recognized officially in 1893 by Walter Amelung, confirming that the piece was not found during consul Fagan's excavations at Tindari in 1808.

The return to Athens, she said, "is not simply the return to Greece of one of the most illustrious pieces of its archaeological history, but [sheds] new light to the complicated and exciting history of collectionism in the 19th century featuring among the oldest of our museums, and the presence of the 'Fagan fragment' in Palermo represents one of the most interesting such incidents."