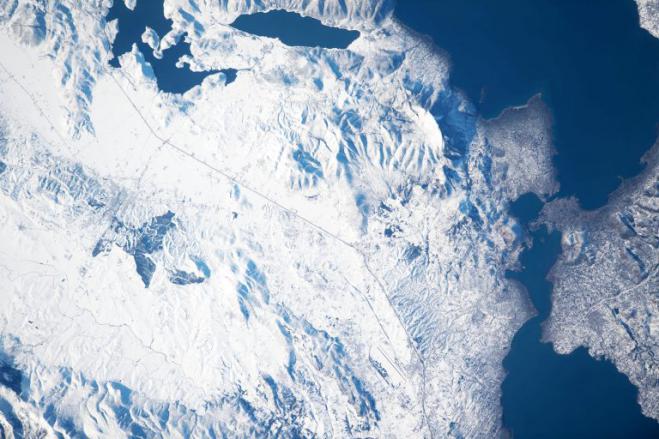 The European Space Agency (ESA) has released a photo of snowy Greece, taken by the International Space Station (ISS) in early February.

The photo, which shows Chalkida, the strait of Euripus and part of the Gulf of Evia, was taken by the German astronaut Matthias Maurer, who posted it on his Twitter account. The pictures show Greece harmonized with its national colors, “wintery Greece shows in blue and white “. 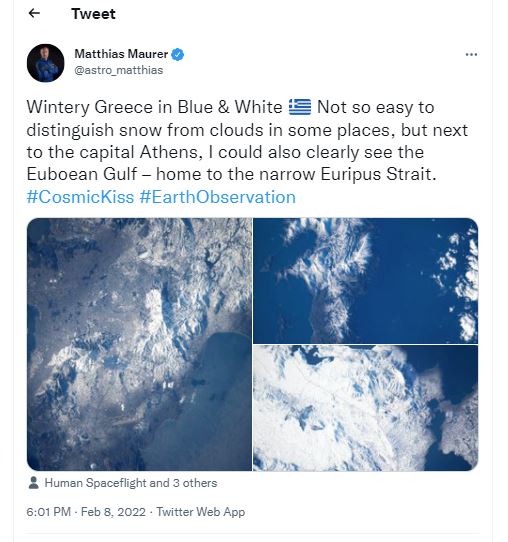 The accompanying text of the ESA states that “for the second year in a row, Greece experienced unprecedented amounts of snow, covering the country in white” and points out that “Hurricane Elpida swept Greece and also parts of Turkey, causing widespread problems in the Mediterranean country, which is better known for its white sand beaches and whitewashed houses than for its snow.”

It also points out that “although it is difficult to deny the beauty of the white and blue landscape in this picture, it is also an unpleasant reminder of the consequences of climate change on the planet. Especially when one compares with the photos of the forest fires in Greece in the summer of 2021, which were taken by the astronaut Toma Peske during the mission of “Alpha”.

Just as satellites watch the Earth from above, so do astronauts witnessing a rapidly changing Earth. The photos taken by the astronauts complement the satellite data, but they also serve another vital role: to highlight the climate problem to the general public. ESA astronaut Matthias Mauer, in addition to his relatively important scientific work on the ISS as part of the Cosmic Kiss mission, is particularly active on social media.

According to the ESA, a beautiful photo like that of snowy Greece “is equivalent to a thousand words about how people interact and affect our environment. We can feel awe at the same time for the beauty but also for the reality of the situation. The question is: what are we going to do about it? “