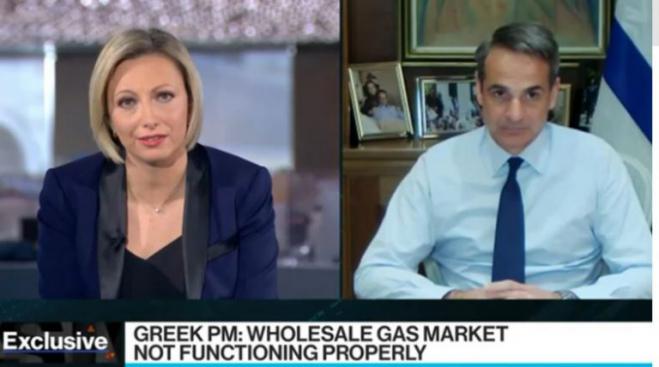 The six-point plan proposed to the EU, in a letter to the President of the Commission Ursula von der Leyen, in order to put a "brake" on gas prices in the markets, was mentioned by Prime Minister Kyriakos Mitsotakis in an interview on Bloomberg Television and journalist Francine Lacqua.

The Prime Minister stressed that the gas markets no longer reflect supply and demand, and therefore expressed his belief that "we must intervene more drastically to avoid extreme fluctuations" in prices.

"It is a bold proposal," Mitsotakis admitted, noting that it would be considered at the EU summit starting tomorrow in Versailles.

"We are facing an extreme situation," which is reflected in the electricity bills paid by households and businesses, the prime minister said, noting that the Greek government, like other European governments, subsidizes its bills.

The extreme prices of gas are noted while the supplies have not changed substantially and that is why, as he said, he proposes a short-term intervention in the pricing structure of natural gas.

At the same time, Mr. Mitsotakis stressed that independence from Russian gas "takes more time than we have", and that Europe must be ready for the possibility of Russia suspending exports.