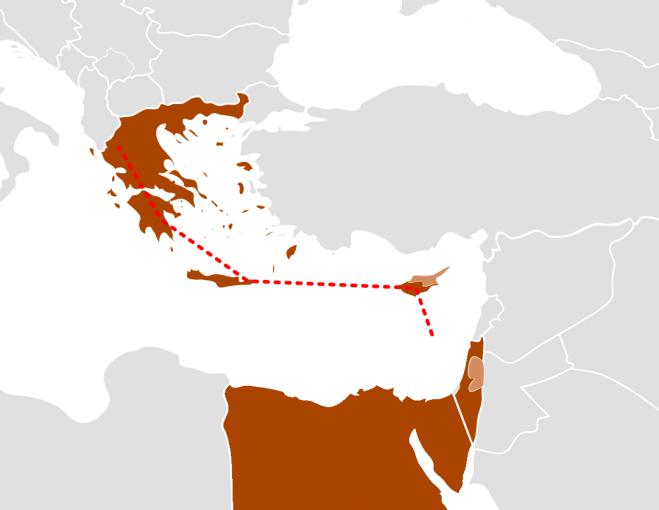 The way for the tripartite meeting of the Ministers of Energy of Greece Costas Skrekas, of Cyprus Natasa Peleidou and of Israel Karin Elharar is likely to open today the corresponding meeting in Athens of the Ministers of Foreign Affairs of the three countries.

Preparatory work is already underway between the three governments so that energy cooperation issues can be raised in Jerusalem, most likely during Holy Week.

The Ministers of Energy of Israel, Greece and Cyprus are expected to discuss on the occasion of the developments in the war in Ukraine issues that enhance the energy security of their countries but mainly the formation of an alternative source of natural gas supply for the EU.

The discussion between the three ministers on the EastMed gas pipeline project will be interesting, information says. The project seems to be returning to the forefront after the strategic choice of the EU to become independent of Russian gas. It is recalled that before the war in Ukraine the US had withdrawn its political support from this project.

Indicative of the dynamics acquired by the pipeline, which aims to transport quantities of natural gas from the fields of Israel and Cyprus to the EU are the recent statements of the Italian Prime Minister Mario Draghi who stressed the need to study this project after the events of the last two months. It is recalled that based on the plans made by the consortium of the companies DEPA and Edison, the pipeline is going to end in Italy. He also noted that after the war in Ukraine, assessments of the viability of the project have changed radically.

EastMed has also come to the fore following discussions in Jerusalem and Ankara over the development of a pipeline to transport gas through Turkey. This is an extremely difficult task, since according to sources, as it encounters the obstacles of the EEZs of Cyprus and Syria.

The electricity interconnection of the three countries is also on the agenda of the tripartite meeting of the energy ministers.

The European Commission has already approved the financing of the part of the electricity interconnection Greece - Cyprus with resources of 657 million euros.

Israel attaches great importance to its electricity interconnection with Cyprus and Greece in order to obtain an alternative source of electricity.