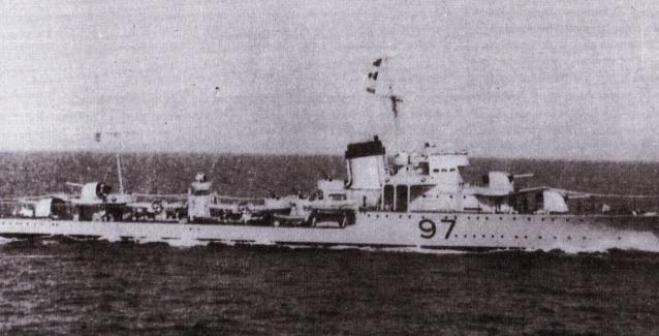 On the afternoon of April 22, 1941, during World War II, the destroyer of the Greek Royal Navy "Hydra" sank as a result of a German air attack in the sea area of ​​Lagousa (Laoussa), a group of islands (Eleousa, Panagosa, Gaitosa, Panagrosa Kordeliaris) of the Saronic Gulf, between Aegina to the south and Salamis to the north. The "Hydra" D-97 (Dardo-type destroyer, made in Italy), the fourth ship of the Greek Navy with the same name, was on duty in the afternoon of April 1941.

More specifically, she was at sea going to Fleves island, having been ordered to accompany, together with the submarine "Papanikolis", a Danish cargo ship loaded with ammunition, first to Souda and then to Alexandria, Egypt. The Greek destroyer was spotted at around 17:30 by a German reconnaissance aircraft and then came under heavy attack by a large number of Junkers Ju 87 dive bombers, commonly known as Stukas.

The 35-40 German dive bombers, making constant use of their machine guns and bombs, wreaked havoc and destruction in just a few minutes, causing the two of the three anti-aircraft guns of the Greek destroyer to go out of action almost immediately and filling the deck with dead, mutilated and severely wounded sailors.

Finally, the destroyer of the Greek Royal Navy, immobilized due to mechanical damage and having received heavy blows from the enemy, sank at 18:04 (about fifteen minutes after the start of the air attack) near the lighthouse on the island of Eleousa. Shortly before the ship sank, an order was given to abandon it. Some of the seriously injured boarded a small boat, some others wore life jackets and dove into the sea, while others, who were able to do so, swam to the islet of Eleousa.

The human losses were unfortunately very large: 42 dead, including the commander of "Hydra", Lieutenant Commander Theodoros Pezopoulos (one of the first to fall), and first mate Captain L. Vlachavas, and many dozens of wounded, many of them with severed limbs.

After the end of the German attack, the wounded were transported by the torpedo boat "Kios" and  fishing boats from Aegina to the Naval Hospital of Aegina, with the aim of providing immediate assistance and dressing.

As for the shipwreck at the bottom of the Saronic Gulf, it was sold after the war and so most of the ship was "cut", lifted and sold as metal. A small part of the bow and a few more remains is what is left in the waters of the Saronic Gulf from the "Hydra" D-97.