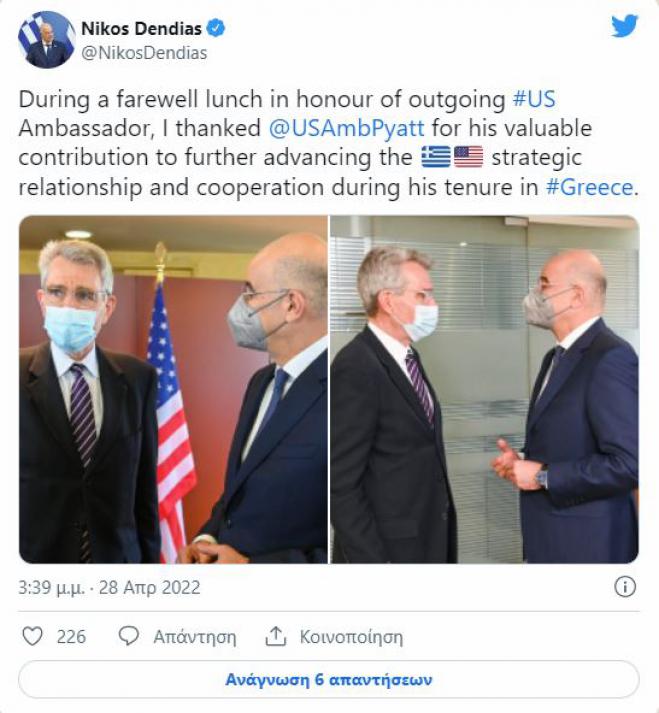 In his address, Nikos Dendias referred to the difficult conditions in which the American ambassador was called to work, such as the pandemic and most recently the Russian invasion of Ukraine, referring to the fact that Mr. Pyatt had previously served as ambassador to Kyiv.

Nikos Dendias remarked -according to diplomatic sources- that, unfortunately, the departure of the American ambassador coincides with the escalation of the Turkish delinquent behavior and in this context, he underlined that only yesterday there were more than 40 overflights from Greek territory, including residential areas. adding that these actions are taking place at a critical juncture for NATO.

The Foreign Minister also referred extensively to the strengthening of the bilateral strategic partnership between the two countries, culminating in the Prime Minister's visit to the United States in a few days.

Mr. Dendias made special reference to the two amendments to the Mutual Defense Cooperation Agreement (MDCA), the frequent contacts with his American counterparts, first with Mike Pompeo and then with Anthony Blinken, as well as with members of the Senate and House, and the Chairman of the Senate Foreign Relations Committee, Robert Menendez,.

He also referred to the "3 + 1" cooperation (Greece, Cyprus, Israel and the USA), noting that the next meeting of the Foreign Ministers will take place in the near future. Finally, the Foreign Minister referred to the special interest shown by the American Ambassador for Greece and the Greeks, who, escaping from the strict diplomatic protocol, visited many parts of the country.

Present at the dinner were Undersecretary of State for Foreign Affairs Andreas Katsaniotis, Chairman of the Committee on National Defense and Foreign Affairs Konstantinos Gioulekas, as well as ambassadors of other countries, including Great Britain, France, Germany, India, Canada, Canada. and the Netherlands.