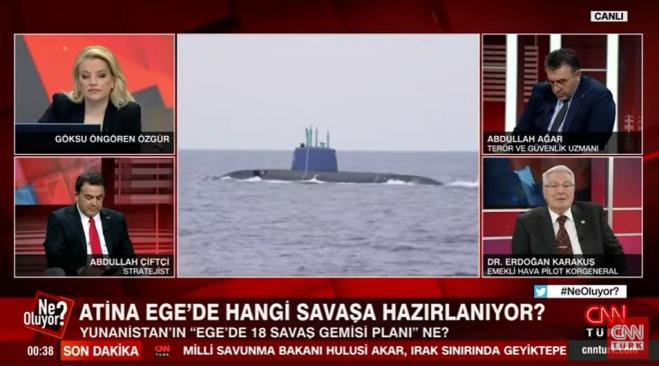 During a show on the tension between the two countries, entitled: "What is Greece's plan for 18 warships in the Aegean?", Karakous stressed that Turkish interests are in conflict with the Greek ones in the Aegean Sea and the Eastern Mediterranean, because our country does not accept the narrative about the Turkish continental shelf.

"The number one threat to Turkey is Greece, because interests are in conflict. "Look at the Eastern Mediterranean, where interests are in conflict, look, they do not want to accept our continental shelf," said Karakous, who had previously claimed that the names "Aegean" and "Agamemnon" were "early Turkish", while he had "analyzed" the manner of Turkey's invasion of Greek Thrace, in case of war with Greece. "In order to stop our ground military operation, they put the Americans in Alexandroupolis," he said.

Earlier, in a news bulletin of the same network, the journalist refers to the decision of Turkey not to participate in the NATO exercise "Tiger Meet", which will be held in Athens, because Greece… "increases the tension and escalates the pressure in the Aegean" despite "Turkey's calls for a peaceful solution to the problems".

"It is reported that Greece, which is deaf to Turkey's calls for resolving problems through peaceful means, methods and dialogue, is the one that continues to increase tension and escalate pressure in the Aegean. In this context, aircraft of the Greek Air Force, initially violated the Turkish airspace 6 times on April 26. Greek aircraft did not stop there, but continued their provocative flights off the Turkish coast on April 27th and 29th. Greece on Wednesday violated exactly 22 Turkish airspace in areas including Dacha, Didim and Dalaman. "The violations of the Greek aircraft that continued on Thursday, were reciprocated in the multiple by Air Force aircraft" he stated, deliberately distorting the real facts.