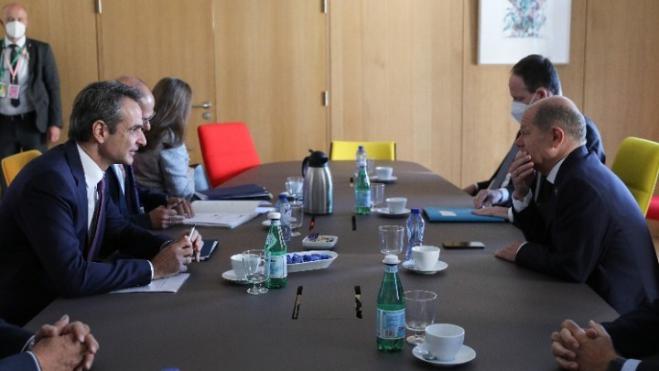 Prime Minister Kyriakos Mitsotakis and German Chancellor Olaf Scholz discussed the support for Ukraine, the energy crisis, but also escalating Turkish provocativeness during their meeting on Tuesday, on the sidelines of the second day of the extraordinary EU summit in Brussels.

According to government sources, Mitsotakis briefed the German Chancellor in detail on the Turkish provocations, ie the violations and overflights of Turkish aircraft, but also on the aggressive rhetoric of the neighbouring country, which, as the Greek prime minister said, undermined stability in the Mediterranean.

According to sources, Mitsotakis showed Scholz the map of the blue homeland with all the Turkish illegal claims and asked for Berlin's support against Turkish delinquency.