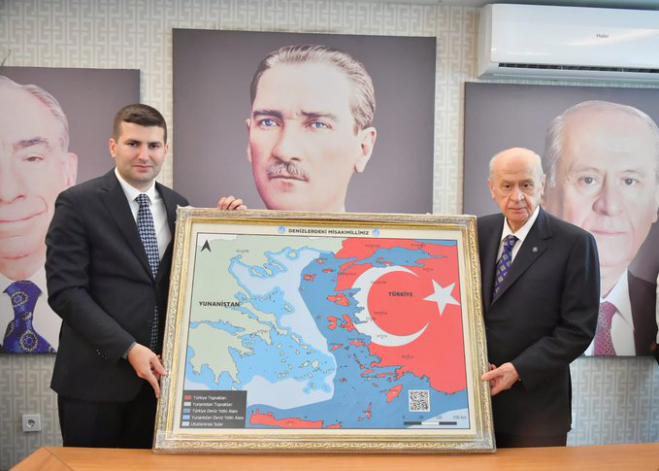 "Our position on this matter is clear, the sovereignty and territorial integrity of Greece are not in question," said a US State Department representative on Tuesday, regarding the release of Turkish maps depicting several Aegean islands as well as Crete as Turkish territory.

This map was shown publicly by Turkish President Recep Tayyip Erdogan's coalition partner and Nationalist Movement Party (MHP) leader Devlet Bahceli, who was photographed with the map during his visit to the offices of Grey Wolves, an affiliate faction of MHP.

Responding to a question by Greek correspondents about whether Washington is concerned about the consolidation of a nationalist and revisionist climate in the neighboring country, the US State Department representative clarified in the clearest way that for the US Greece's sovereignty and territorial integrity are not in question.

Washington's steadfast position was also reiterated, which calls on the two NATO allies to work diplomatically to resolve their differences, and refrain from rhetoric that could lead to a rekindling of tensions.

As was noted, "we continue to encourage our NATO allies, Greece and Turkey, to work together to maintain peace and security in the region and to resolve disputes in a diplomatic manner. We urge our allies to avoid rhetoric and actions that could further escalate tensions."