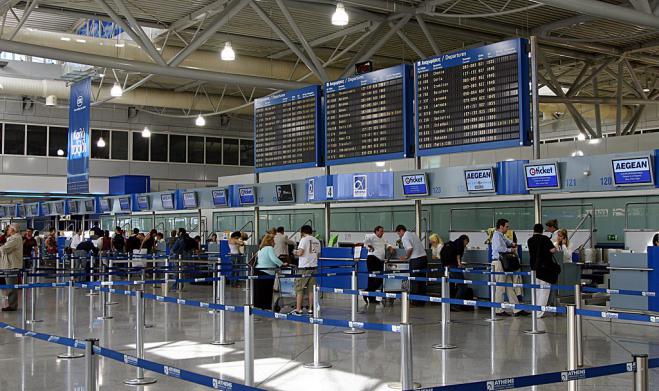 Travelers at Greek airports are facing problems in flights and baggage collection, which however do not resemble the chaos of European airports. 80% of delays today are caused by problems at European airports. About 600-1,000 pieces of baggage from flights that have already arrived, find their way to "Eleftherios Venizelos" airport every day, with management having installed a temporary logistics system to deal with this phenomenon.

But it is not only the European domino effect that Greek airports have to deal with, while at the peak of the tourist season and with arrivals estimated to have increased by 20% compared to 2019. Chaos - although not unpredictable - is just around the corner, as the representatives of the employees of the Civil Aviation Service (CAA) wrote in an announcement yesterday about unequal treatment of employees of the same Service and warn of mobilizations.

However, relevant initiatives by the Ministry of Infrastructure and Transport are expected before the situation reaches the point of no return, in the most critical phase of a demanding season that will determine the restart of the sector, after the test of tthe pandemic.

The "red cloth" is the Ministry's agreement with the air traffic controllers, which was sealed, after months of negotiations, just before the start of the season, which provides, among other things, for a performance bonus and the liquidation of the Eurocontrol allowance. The goal of the joint agreement was to prevent the long delays that exposed the country internationally in 2019 from occurring again this summer.

Long queues at airports, disgruntled passengers and the grumbling of market people, who attributed the problems to a "white strike" by a section of controllers, dominated the big picture of the last pre-pandemic summer in 2019. It is recalled that three Greek airports were then ranked in the top 10 of those with the most delays in Europe, Mykonos, Santorini and Athens.

The agreement provided for the implementation for this summer of new work programs resulting in an increase of almost 10% in man-hours, to strengthen shifts in hours and days with increased traffic. Also, the increase of the minimum movements carried out, and in particular at the airports:

of Athens by 27%, with immediate priority on flights from Mykonos and Santorini
of Heraklion by 20% and
of Santorini by 20%.
Also, the performance of the Bonus for 2020, which the current government instituted for "better air traffic management". The money comes from the airport tax pool. Furthermore, a standing request of the auditors' branch, regarding the establishment of the Professional Insurance Fund, will be fulfilled, while an additional round of recruitment is also expected. The first step was taken with the recruitment of 35 air traffic controllers, following a special provision in the bill for innovation proposals.

The domino effect at Greek airports

From the figures so far, under the actions of the competent Ministry, 53% of flights at Athens airport land on time. The total number of flights in June, for example, was about 9,650 with 4,520 of them delayed. As for the 47% of all flights that were delayed, approximately 80% is due to the domino effect of delays at Europe's major airports.

The remaining 20% ​​is due, according to information, either to commercial flights that take place outside slots -mainly at Heraklion airport-, or to private flights to islands that are tourist destinations, which cause "disturbance" in the landing schedule of those airports and affect smooth air traffic flow.

Federations of Civil Aviation Authority Associations: Further recruitment and efficiency bonuses for everyone

However, as aviation market pundits had foreseen, the employees of the CAA, only a portion of which are air controllers, would not be long in asking for similar treatment from the state. In support of the predictions that this would take place at the peak of the summer season, the Federation of Civil Aviation Service Associations (OSYPA) made known, through an announcement, yesterday (July 29, 2022), the demands and the actions it will undertake in the next period, culminating in a warning strike, if other initiatives do not bear fruit.

In their statement, moreover, the representatives of the Federation state that "the Ministry of Infrastructure and Transport, after three years of only promises without results, but also its defiant attitude, shows in every way that it is only interested in only one sector of the CAA, ostentatiously disregarding all the others, apparently ignoring that for the orderly operation of a service, all branches are needed".

"Not even one employee can get get sick"

They also note that a competition for 273 recruits for all specialties has been expected for three years, while "the staff has been reduced to such an extent that not even one employee is allowed to get sick, as it is a reason to shut down a regional airport," a clear reference to the shut down of Kastellorizo airfield after the only air controller fell ill there. At the same time, they emphasize that for two years they have been waiting for the relocation of the Service to a vertical CAA owned unit, so that it is not scattered among leased premises.

"However, our Ministry continues to turn a blind eye to the problems of the operation of our Service, legislating only in favor of one branch, implementing only for them a recruitment process, financing their professional insurance fund, financial assistance due to covid-19, creating an efficiency bonus and all that only for one branch," the announcement continues, stressing that it is only due to the agreement with one workers' branch that the country's airports do not show the problems of other countries.

"Probably the government ignores that no matter how good a piece of jewelry you carry, if the chain that holds breaks, both the jewelry and the chain will be lost," OSYPA warns, concluding that with the July 4th decision of its Board of Directors,  it will proceed with a mediation process and if there is no result in a 24-hour warning strike on Friday, July 29, 2022, essentially requesting the removal of the unequal treatment of employees of the same Service, which translates into recruitment for all branches, relocation of CAA, reinstatement of funding for their pension fund, and an efficiency bonus for the rest of the employees as well .