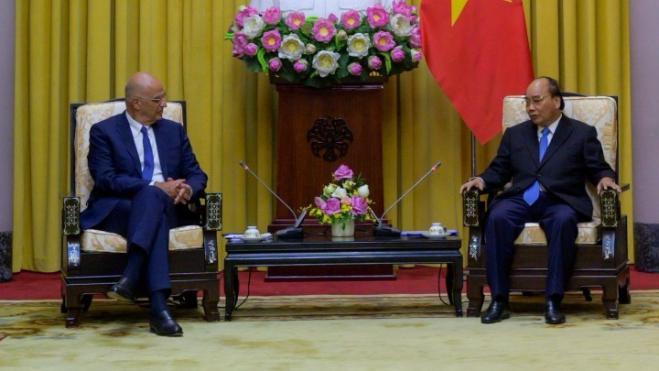 Minister of Foreign Affairs Nikos Dendias is attending the works of the 55th ASEAN (Association of South – East Asian Nations) Summit in Cambodia, while on the sidelines of the summit he will have a series of meetings with his counterparts.

In particular, on Wednesday the Instrument of Accession to the Treaty of Amity and Cooperation in Southeast Asia (TAC) will be signed. The Admission Body to "TAC" is expected to be signed, within the same ceremony, by representatives of Denmark, the United Arab Emirates, Qatar, the Netherlands and Oman.

Read also: Greece is looking for alliances in Southeast Asia – Dendias is in Vietnam and Cambodia

The Minister of Foreign Affairs went to Cambodia from Vietnam, where on Monday he was received by the President and the Prime Minister of the country, while he had talks with his Vietnamese counterpart. The talks initially focused on developing bilateral ties, mainly through expanding trade in areas of common interest, such as shipping and renewable energy.

Special reference, as pointed out by diplomatic sources, was made to the two countries' joint commitment to International Law and the Law of the Sea (UNCLOS), which is a compass for resolving all disputes. It is noted that Vietnam is a founding member of the "Group of Friends of UNCLOS". It is also recalled that this issue was at the center of the foreign minister's contacts in New Delhi and Tokyo last April and is expected to be discussed during the contacts with ASEAN foreign ministers in Cambodia.

In fact, during Mr. Dendias' contacts in Hanoi, he made the challenges facing Greec in the Eastern Mediterranean abundantly clear and at the same time he was informed about the situation in the South China Sea.

Also, a memorandum of understanding was signed in the field of Diplomatic Education and in the context of cultural cooperation, he visited the offices of the National Olympic Committee of Vietnam, where he made a donation to support young athletes as part of related  Greek initiatives at the United Nations.

Cooperation in the framework of international organizations was also discussed, with Mr. Dendias expressing thanks for the support from Vietnam of the Greek candidacy for the Security Council, in the period 2025-2026.

Finally, European Union-Vietnam relations were also examined, in the light of the implementation of the Free Trade Agreement, as well as the Agreement for the Protection of Investments.