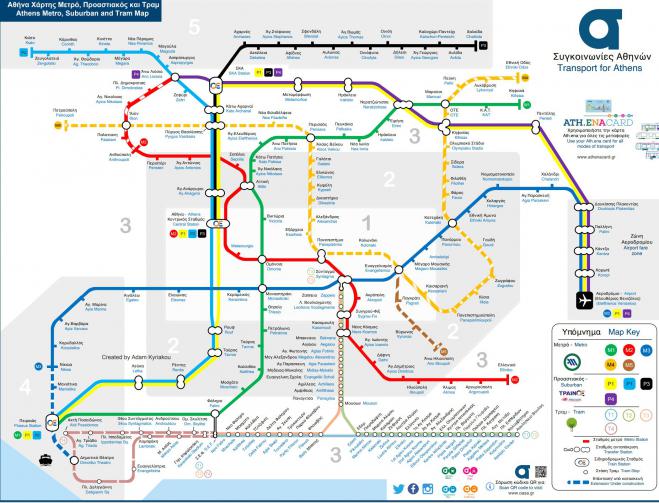 A thirty-year cycle is closing, while a new one has already opened with the Athens metro adding an additional 38.3 km to the 85.3 km existing network.

Today, more than 2.6 million Athenians have access to rail transport, a number that will grow in the next decade, but there is still a long way to go. With the additional 15 stations of the new Line 4, it will have just one station per square kilometer, when Paris has four.

Athenians' favorite transport is turning a page next fall. At the end of September, the three remaining stations of the extension to Piraeus, in Maniatika, Piraeus, Municipal Theater, are expected to be open to passengers.

Early testing is going well and the final steps are progressing on schedule. The new stations are estimated to add 69,000 passengers to the network daily.

Piraeus will become the largest transport and logistics hub in the country, centered on the port, as commuters will be able to get to Athens International Airport within 50 minutes, featuring connections to Lines 1 and 3 of the metro, as well as to the suburban railway, through which it will also link with the railway.

With studies going full steam, building the foundations of the huge 12.8 km project of the new "Alsos Veikou - Goudi" line, this autumn the capital will welcome, 28 years after the arrival of the first TBM machine, two brand new "moles". Thus in early 2023, the countdown will begin for the start of work on the largest infrastructure project currently underway in Europe, worth 1.8 billion euros.

The two state-of-the-art, silent boring machines will start the underground journey from both ends of the new orange line. At that time, the first tunnel boring machine is being dismantled to arrive from Germany through the port of Piraeus in September, so that it can be reassembled and "burrow" in Katehaki Avenue.

While the second TBM that will arrive in October will start from Alsos Veikou park, so that the two machines will meet at "Evangelismos", essentially digging the two "arms" of the new line which has a "U" shape ».

As for the preparatory works of the project, construction sites have already been activated in 13 of the 15 stations. On July 31, in fact, the relocation of utility networks began at the "Kolonaki" station in Filiki Etairias square (archaeological work is already being carried out at the construction site), for which traffic arrangements are required, with the first phase lasting approximately 3 weeks.

The most difficult task, as expected from the beginning, is the construction site in Exarchia Square.

Attiko Metro's attempts to launch work without police presence to date have failed, so the next step will be taken directly under the umbrella of police forces. Besides, as the Ministry of Infrastructure has made clear, the design of the project, delivered by the previous government, is not going to change.

The "Evangelismos" station developed also brought about reactions, with the Rizari park at the forefront, where the way to improve the design is being studied, but within the provisions of the existing environmental permit.

The expansions that will decongest Attica Basin

Amidst the financial crisis, only the extension of Line 3 to Piraeus began in Athens, with the accumulated financial and engineering problems leading to the delivery of the entire project with a delay of 5 years (the first three stations were put into commercial operation in July 2020). But a new generation of expansions is coming to the fore, as the priority of the Ministry of Infrastructure and Transport is to "run" pro-environmental projects that will relieve the worsening traffic congestion in the Basin.

The first step is to launch the tender for the 4.1 km longextension of Line 2, in the Anthoupolis - Ilion section, with three stations in Palatiani, Ilion and Agios Nikolaos, with an estimated budget of 350 million euros, within the autumn.

It is estimated that it will serve 50,000 passengers a day, significantly reducing the time currently required to reach the city center. In the next phase, it is planned to further extend the line with three stations to Kamatero and Ano Liosia, where it will be connected to the suburban railway on Attiki Odos, finally ending in Acharnes (center of Menidi).

The metro is also setting off for the Stavros Niarchos Foundation Cultural Center in Kallithea, and from there to Ilioupoli, Glyfada and Petroupoli. A bunch of new extensions, which are expected to add about 22 km and 17 new stations to the network and are being gradually designed by Attiko Metro.

The priority is the underground connection of the 5 km long electric line after the Thisio station to Kallithea, with four stations: Hamosternas, Davaki Square, Filaretou Hill/Tzitzifies and Stavros Niarchos. The cost is estimated at 450 million euros. The next phase of the line's development will extend towards Paleo Faliro, along Amphithea Avenue.

The 4.4 km long "southern" extension of Line 2 from Elliniko, with stations at Ano Glyfada, Vouliagmenis Avenue and Glyfada, is still being prepared, with a budget of 350 million euros. While two extensions of the new Line 4 are in the pipeline.

In the foreground is the development of the extension from Goudi to Marousi with seven new stations that will serve the municipalities of Psychiko-Filothei, Chalandri and M arousi and then with three stations to the Athens - Thessaloniki National Highway.

The twin project has an estimated budget of over €1 billion. The next stage of development of Line 1, after the KAT station to Kifissia, N. Erythraia and the Varymombi junction, also aims at connecting the network with the National Highway. The continuation certainly requires funds which will be sought in the future.