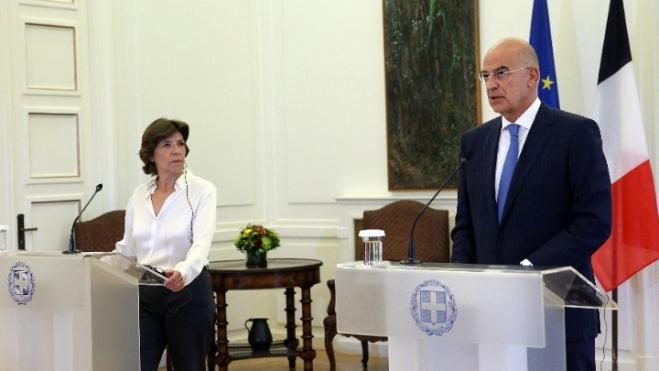 The Greek minister added that statements coming out of Turkey are "unacceptable, unheard-of and condemnable," and he pointed out that "we are neither afraid nor intimidated."

Asked about Tuesday's statement by Turkish President Recep Tayyip Erdogan, who said that Turkey will “ descent suddenly one night” on Greek islands, spoken during an official visit to Bosnia on the day, Dendias said that the Turkish side has been making increasingly outrageous and unacceptable statements in recent days, and he reiterated that Greece always acts on the basis of International Law and the Law of the Sea.

Dendias went on to say that "anyone who dreams of attacks and conquests should think it over more than once," as "we are more than self-sufficient in our ability to defend our homeland, our territorial independence and our integrity."

Moreover, he added that "we are absolutely certain of our alliances and the attitude of our partners. The EU has already demonstrated, in the case of Ukraine, that threats and incursions beyond International Law create an unprecedented unity and a straightforward response."

Just yesterday, Dendias continued, it was said that "Greece is not Turkey's equal and cannot be its interlocutor. Turkey threatens Greece with war if it applies its rights as derived from International Law and the International Law of the Sea. It violates our national sovereignty on a daily basis. This year alone there have been more than 6,100 violations of Greece's national airspace, 157 overflights over Greek territory and 1,000 violations of our territorial waters."

Finally, Dendias thanked his French counterpart for briefing him on her talks in Ankara that preceded her Athens visit, and he added that he fully agrees with the stance expressed by her to her Turkish counterpart, which points to the avoidance of tension-raising and of provocative rhetoric.

Speaking on the issue, French Foreign Affairs Minister Colonna underlined that France "has always stood and will continue standing on Greece's side," and that her country is closely following all developments in this matter.

Responding to a journalist's question about how France will stand on Greece's side in the context of the defense agreement signed between Greece and France in September 2021, and if Turkey's threats materialize and there is an escalation, she said that "article 21 of this agreement describes precisely such an eventuality, that assistance is provided if either country is faced with a confirmed armed attack in its territory." She did, however, point out that "we are doing everything we can to avoid being in this situation."