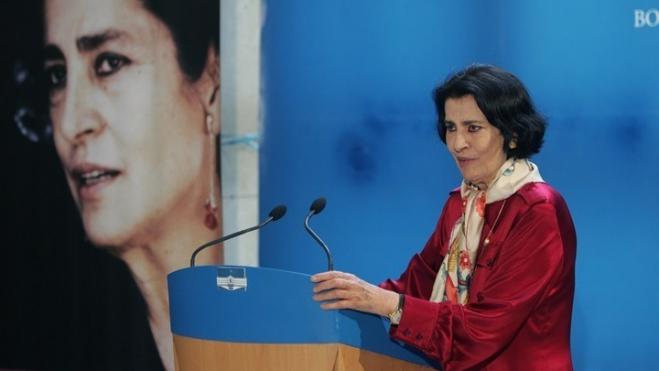 The actress Irene Papas passed away on Wednesday at the age of 96, leaving behind a great cultural legacy.

An archaic, Doric figure who was considered a quintessential symbol of Greek beauty and a famous representative of Mediterranean culture abroad, Irene Papas became internationally known for her acting skills and her charismatic and dynamic presence and personality.

In her career, she performed important female roles in the theatre and cinema, fully embodying the power of ancient tragedy.

Born Irene Lelekou in the village of Chiliomodi in Corinth in 1926, she took acting lessons at the National School of Classical Theatre in Athens as a teenager and started her career as a performer at 15 years old as a radio producer, singer and dancer. At the age of 18 she married author Alkis Papas and later retained his surname, which which she became internationally famous, after their brief marriage had ended.

Her first roles as an actress were with the National Theatre, where her talent and performances in ancient tragedies such as "Medea" and "Electra" soon made her well known. She also did a stint of variety, following a proposal made by writer and director Alekos Sakellarios in her last year of acting school, while her cinema debut was in 1948 with the film "Fallen Angels" directed by Nikos Tsiforos.

Her role in the Frixos Iliadis' "Dead City" in 1951 offered her the first international exposure, when the film was shown at the Cannes Festival where Papas was very well received. After a period working as a film star in Italy, in 1962 she collaborated with director Michael Cacoyannis on the film version of Euripides' tragedy "Electra", which earned 24 prizes in total, including several at the prestigious Cannes Festival.

Throughout her life, she acted in more than 80 films produced throughout the world, playing alongside stars such as Marlon Brando, Katherine Hepburn, Yves Montand, Gregory Peck, Anthony Quinn, Richard Burton, James Cagney and others. In addition to film transpositions of ancient tragedy, among her best known roles were in the films "Guns of Navarone" and the widow in "Zorba the Greek", while among the highlights of her career was her participation in Costas Gavras' "Z" in 1969, which won an Oscar for best foreign-language film.

She also played on Broadway, starting in 1967 when she played alongside Jon Voight in the play "That Summer - That Fall", and later starred as Helen in the film "The Trojan Women" (1972) and as Clytaemnestra in "Iphigeneia" in 1977, both directed by Cacoyannis.

Papas also worked as a singer with the composer Vangelis, participating in the recordings of the last album of the group "Aphrodite's Child" and later in "Odes", which reprised Greek traditional songs, and "Rhapsodies" based on the Easter hymns.

In additional to working in film and theatre, her work in Italy included roles in television, such as her Penelope in Franco Rossi's "Odyssey" in 1968, while her contribution to the arts has earned her multiple awards within and outside of Greece. Among them was a Commander of the Order of the Phoenix medal presented to her in 1995 by President of the Hellenic Republic Kostis Stephanopoulos and the title of "Woman of Europe" given to her in 2000 for her contribution to promoting European cultural identity.

In 2008, she received the highly prestigious "International Award for Culture" from the organisation Premio Roma at the ancient theatre Ostia Antica in Italy, while in 2009 she received the Golden Lion at the 40th Venice Biennale and, in the same year, was among 260 artists invited to the Vatican to "transmit God's message through their art".