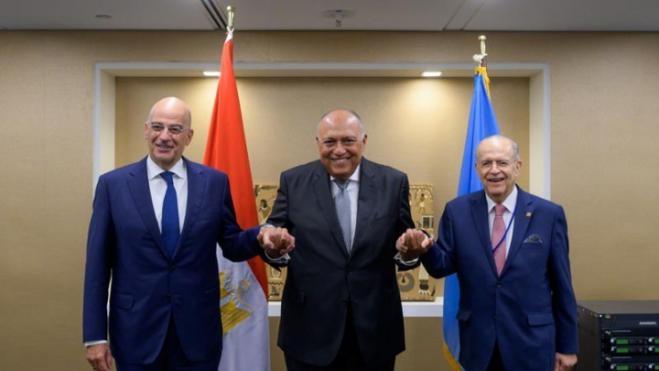 Foreign Minister Nikos Dendias, speaking in New York, sent the message that "the Mitsotakis Government is promoting an ambitious project to turn Greece into an energy hub, and through its interconnection with Egypt, to be able to provide the European market with capabilities for addressing the energy balance crisis caused by the Russian invasion of Ukraine."

Dendias made the statement after a trilateral meeting on Tuesday with his counterparts from Egypt, Sameh Shoukry, and from the Republic of Cyprus, Ioannis Kasoulides, on the sidelines of the UN General Assembly, in New York.

"We had a very interesting meeting today with the Foreign Minister of Egypt, Sameh Shoukry, followed by a trilateral meeting between Greece, Egypt, and the Republic of Cyprus, with Ioannis Kasoulides. In this regard, all the problems in the region were discussed," said Dendias.

Among the topics covered, the minister said, were energy, Greece’s interconnection with Egypt, and Egypt’s role in the EU’s energy security.

"As is well known, we have a cordial understanding and share identical views on a number of problems and situations with Egypt, and we regard in the same way Turkey’s aggressive conduct and its disregard for UNCLOS and its implementation in the Eastern Mediterranean," he said.