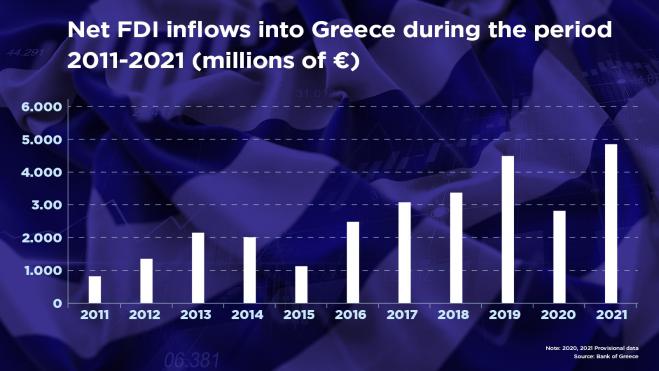 “The foundations we have laid for three years are strong and unwavering, despite the ever-changing environment. In Greece, we observe a continuous flow of investments, which fills us with optimism and determination to continue dynamically in the future” said the secretary general for International Economic Relations and Outreach (DOSE) and president of Enterprise Greece, Ioannis Smyrlis, during his speech at the conference of the Economist on the topic: “SUSTAINABLE FINANCE IN UNCERTAIN TIMES: Solid foundations in volatile economies”.

Mr. Smyrlis referred to the extremely demanding and difficult situation shaped by factors such as the pandemic crisis and the war in Ukraine, which – as he said – the government is facing as a challenge by implementing reforms to attract investments, as a result of which Greece is today reliable investment pole and regional hub of stability and development.

In particular, Mr. Smyrlis highlighted the field of Economic Diplomacy, underlining that the structural reforms implemented by the Ministry of Foreign Affairs and the “tools” provided to exporters aim to strengthen the export profile of Greek companies, so that they can not only stand , but also star in international markets.

“2021 was a milestone year for Greek exports, which set a record of 40 billion euros, 22% of GDP,” he explained, pointing out that “for the first seven months of 2022, we see our exports show an increase of almost of 40%, compared to the same period last year”.

Speaking about the attraction of Foreign Direct Investment (FDI), Mr. Smyrlis pointed out that our country reached 5 billion euros for 2021, recording a record for the largest inflow of FDI since 2002.

In this context, he referred to the leapt, as he characterized it, increase in strategic investments between July 2019 and October 2021, with the approved investment plans exceeding 8 billion euros, while in the period February 2015-July 2019, they amounted to 1.3 billion euros.