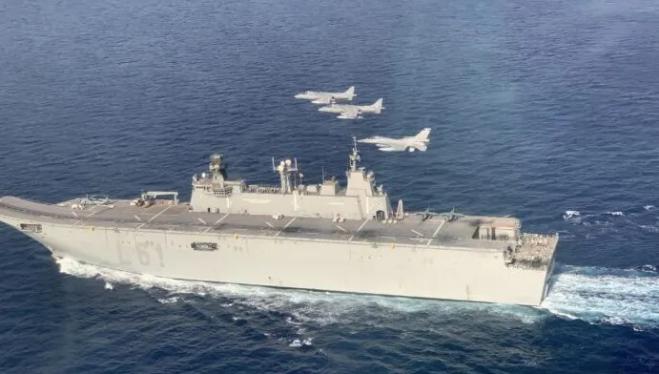 Joint training of the Hellenic Armed Forces with the Spanish Amphibious Task Force (SP ATF) took place on Saturday 24 and Monday 26 September in the maritime areas northwest of the island of Karpathos, north of Crete and west of the Peloponnese.
Τhe Spanish Amphibious Strike Force consists of the aircraft carrier "ESPS Juan Carlos I", the amphibious ship "ESPS Castilla" and the frigate "ESPS Navarra".
During the night hours of Saturday, September 24, a PASSEX (Passing Exercise) between the Hellenic Navy's frigate "Adrias" and the Spanish Amphibious Strike Force was conducted in the wider sea area northwest of Karpathos, where communications, synthesis and exchange of tactical images, targeting, progressive maneuvers and air countermeasures were carried out, involving two Hellenic Air Force's F-16 fighter jets.
On Monday, September 26, joint training of two F-4 fighter aircraft and two F-16 fighter aircraft of Hellenic Air Force with four AV-8B Harrier fighter aircraft of the aircraft carrier "ESPS Juan Carlos I" was conducted in the wider maritime area north of Crete and west of the Peloponnese, in close air support missions with terminal fire guidance, as well as air combat training missions between different types of aircraft.
It is worth emphasizing that the joint training especially with the aircraft carrier "ESPS Juan Carlos I", which is of the same class as the corresponding Turkish "Anadolu", was of particular value due to the opportunity given to the Greek aircraft to get an idea of ​​the capabilities of this vessel as well as the tactics dealing with it.
Tagged under