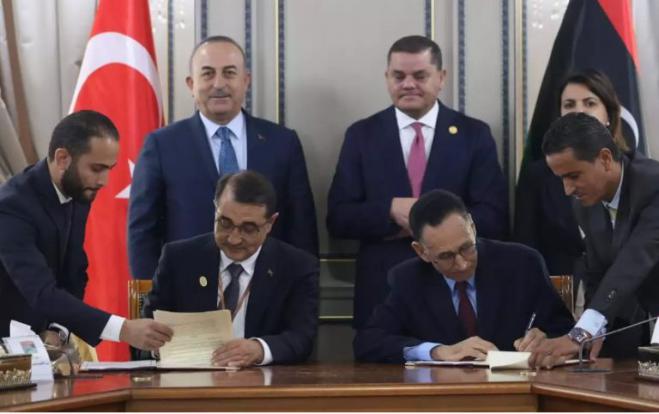 The issue of a widely reported agreement between the Libyan government and Turkey, essentially allowing the latter to “lease” maritime zones and exploit energy resources of the former, is being closely followed by Athens, diplomatic sources in the Greek capital said on Monday.

The statement came before Turkish Foreign Minister Mevlut Cavusoglu traveled to Tripoli the same day to pen an agreement, ostensibly based on a delimitation agreement signed by the provisional Libyan presidency with Turkey in November 2019 – a flatly pact rejected by Greece as being utterly baseless and outside the framework of the UN Convention on the Law of the Sea (UNCLOS).

At the time, the very high-profile instance of “Turkography” had attracted a scornful reaction by Athens and vigorous diplomatic activity by the Mitsotakis government.
The head of the shaky Tripoli-based “Government of National Accord” government in 2019 had signed the deal in Istanbul with Turkish President Recep Tayyip Erdogan.

Turkey is a “persistent objector”, a neologism now used by Turkish diplomacy, to UNCLOS, and has refused to sign the 1980s Convention – alone amongst EU member-states or candidates states. A Gaddafi-led Libya, conversely, had signed but not ratified UNCLOS.

The same sources in Athens on Monday said an official Greek reaction will come once, and if, the text of the agreement is released.

Sources added that respect of an internationally recognized Greece-Egypt 2020 agreement to partially delimitate maritime zones between the two countries in the east Mediterranean is of “absolute vital importance”.

Even as the first reports of the development were circulated, mostly by pro-AKP media in Turkey, diplomats in Athens had warned that the increasingly belligerent Erdogan government was igniting yet another source of tension in the Mediterranean. Greek diplomacy is also reportedly readying another round of briefings of allies and partners over the latest instance of Ankara’s revisionism and revanchist rhetoric.