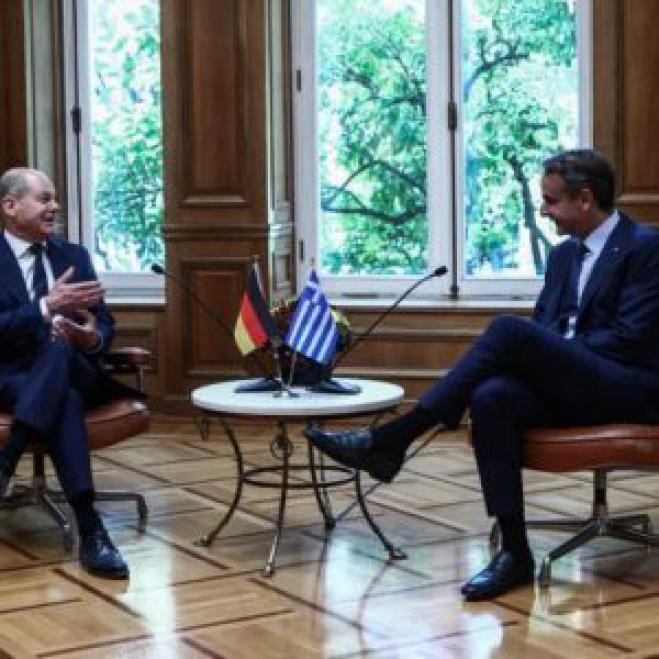 Greek and German leaders on Thursday discussed the situation in Ukraine in the wake of Russia’s invasion of the country last February, besides the expected focus on the ongoing energy crisis and bilateral relations, according to a bulletin issued after the late morning meeting in Athens between Kyriakos Mitsotakis and Olaf Scholz.

The German chancellor confirmed that his talks with the Greek premier mainly centered on the Russian invasion and its repercussions, while they had also discussed the situation in the eastern Mediterranean and the western Balkans.

Mitsotakis also reportedly briefed the German leader over what Athens’ sternly calls an illegal agreement between Turkey and the interim – and now expired - Government of National Accord in Tripoli, Libya.

Touching on the west Balkan state’s EU accession course – which has significantly slowed down over past years – both sides cited the need to promote the region’s European prospects as based on the Berlin Process at the next EU summit meeting on Nov. 3. Mitsotakis is due to attend the summit.

The Greek side also brought up the issue of migration, emphasizing the need for a common European policy and support of “front-line countries”.

Earlier, speaking during a joint press conference, which was shown live by several television stations in Greece, Scholz highlighted what he called "excellent economic conditions" in the country, saying he has arrived in a "new Greece".

Referring to the repercussions of the Ukrainian crisis, he said energy prices must decrease and that EU leaders are in agreement over the fact that solidarity was essential for dealing with the crisis.

The EU has reached a decision for common platforms and decisions that will lead to a reduction in prices and increase the purchasing power of salaries, and "to help so that through the decisions we take...there is no price speculation," Scholz said.