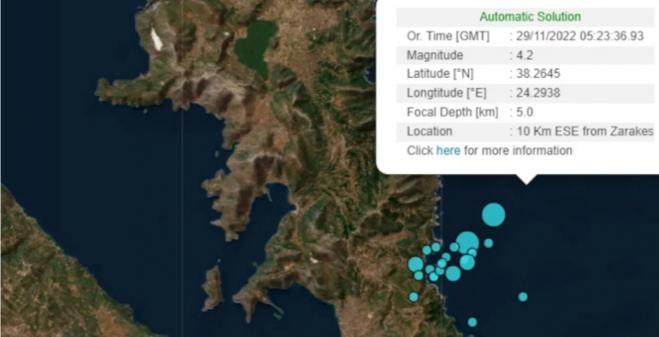 A 4.7 Richter earthquake occurred shortly after 6:30 on Tuesday morning off Evia, with the tremor also being felt in Attica. A barrage of aftershocks followed, in Evia after the initial tremor. By 7:30 in the morning, three aftershocks of magnitude 4.1, 3.2 and 2.2 were even felt in the Attica basin.

Seismologists are monitoring the phenomenon and currently cannot say for sure that the first earthquake was the main one. The fact, however, that aftershocks are occurring shows that the phenomenon is easing.

The initial quake was followed, almost an hour later, by a new earthquake (in the same area) measuring 4.1 on the Richter scale, while it was preceded by two smaller ones of 3.2 and 2.2 degrees.

The epicenter of the first earthquake was located in a marine area, 5 kilometers offshore from Zarakes in Evia, near Almyropotamos, on the southeast side of the island. Its focal depth was 13.3 kilometers.

The second earthquake had its epicenter 8 km SE from Zarakes with a focal depth of 5 km.

Seismologist Efthymios Lekkas made the first assessments speaking to public broacasterERT, noting: "We have a 4.7 degree earthquake from the Evia region. The spot is close to Almyropotamos. The tremor was felt throughout the basin and, of course, in Evia. The focal depth is approximately 10 kilometers, from an area that does not have much seismicity. We have no evidence of faults in South Evia."

For his part, seismologist Gerasimos Papadopoulos said that seismic activity has been ongoing in the area for several days, there is an excitation, which will be evaluated in the near future.

As he said, no one can say now whether it was the main earthquake or not. He added that schools should not be opened for at least one day in order to carry out inspections.

Reports of small cracks in houses

The mayor of Karystos, Lefteris Raviolos, said: "The earthquake was very noticeable. Fortunately, no damage has been reported. We are talking to the deputy mayors and for now we have nothing. At 5:00 there was a precipitous event around 3 Richter".

For his part, the president of the Zarakes community, Christos Tranos, spoke to ANT1 about small cracks in houses, without, of course, the situation inspiring great concern.