At his 1975 piano recital debut, Marios Papadopoulos, pianist, founder and music director of the Oxford Philharmonic Orchestra, at the University of Oxford, was described by The Times newspaper as "having all the attributes of one of the world's greatest players". On the occasion of his concert on October 30th, 2018, at Kaufman Music Center in New York, Dr. Papadopoulos spoke with New Greek TV's journalist, Despina Afentouli, about his international career as both pianist and conductor.

Please tell us more about your concert on October 30, 2018 in New York.

The concert on the 30th October organized by the Hellenic-American Cultural Foundation (HACF) will focus on the new production of Mozart's "Le nozze di Figaro" I will be conducting in March 2019 at the new state-of-the-art Opera House at the Niarchos Center in Athens with the Greek National Opera and the work of the Oxford Philharmonic. The Director of the HACF, Mr Alexandros Efklidis, will give an introduction on aspects of the production followed by a performance of arias and duets from the opera performed by protagonists of the Greek National taking part in the Athens production. In the second half, two of my esteemed colleagues from the Oxford Philharmonic will join me in a performance of Tchaikovsky's epic Piano Trio. I am grateful to Hellenic-American Cultural Foundation for offering us the opportunity to showcase our work to Greek Americans and not only.

How has your Hellenic background contributed to your love of the arts?

For four hundred years when the West was flourishing in the development of the arts, Greece was under Ottoman occupation. We had to catch up very fast. The only way we could do so was to draw on Greece's glorious past and find our own voice in an ever-evolving world.

What are your artistic influences?

My main influence was the Greek pianist Gina Bachauer, who heard me when I was 7 and took me under her wing, arranging for me to move to London and enter the class of the renowned piano teacher Ilona Kabos. Mme Bachauer remained my mentor until her untimely death in 1976.

What drew you to pursue a career in Music?

I had little choice. Decisions were made for me when I was young and having progressed through the system from a very early age – attaining a Diploma in Piano Performance at the Royal College of Music at the age of 14 – I found myself on the international circuit performing all over the world. Other than a brief hiatus to rediscover myself, music has been the centre of my life for the last 50 years. I do not for a moment regret having followed a path in music: music is my life and I cannot live without it.

At your 1975 piano recital debut, The Times described you as "having all the attributes of one of the world's greatest players". Why is it important to strive for excellence?

It is very important. As I get older, things become more difficult as I have become a lot more demanding of myself in my search for excellence.

What inspired you to develop the Oxford Philharmonic Orchestra in Residence at the University of Oxford?

I never enjoyed travelling too much and hopping from one place to another. Founding an orchestra where I can make music in one place attracted me a great deal. Oxford offers me a platform for my work as an artist and I have a discerning audience with whom I have built a relationship over the years. Most of my work now is in Oxford.

As the Music Director of the Oxford Philharmonic Orchestra, you have collaborated with many accomplished artists. What are the key aspects of a great collaboration?

With every great artist, I learn something. My many encounters with the world's greatest artists have made me a better musician, I think.

You head up projects on taking music to areas of social and economic disadvantage. In your opinion, how does music contribute to the quality of a life of a person?

Undoubtedly. In some cases it is life-changing. I always thrive to touch people with my music: when a tear has been shed, I know I have had a profound effect on someone while performing.

The Oxford Philharmonic Orchestra collaborates with Oxford University Faculty of Music. To what extent are students interested in Music today?

Music is a universal language. In Oxford, as a percentage of attendance, we are fortunate to welcome more students at our concerts than any other orchestra in the UK.

Your partnerships with Oxford City Council and Oxfordshire County Council provide tuition and performance opportunities for young musicians. How important is it to have public support?

Unfortunately, music is being marginalized in our education system in the UK. An orchestra in the 21st century has to operate more as a musical resource to fill the gap and provide educational opportunities to students. Public support is essential but at a time when cuts in musical education are made across the board, we have to find alternative sources of funding to fulfill our role as both performers and educators.

You were honored and awarded by the Worshipful Company of Musicians, the Oxford City and the Queen for your services to music in Oxford. What do these recognitions mean to you?

I feel honored to have received these coveted awards which acknowledge, not only my personal contribution but that made by my colleagues. 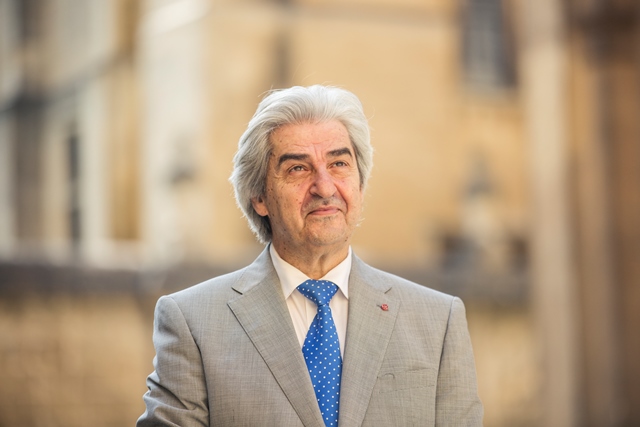 Marios Papadopoulos, pianist, founder and music director of the Oxford Philharmonic Orchestra, at the University of Oxford. Photograph: Chris Gloag. 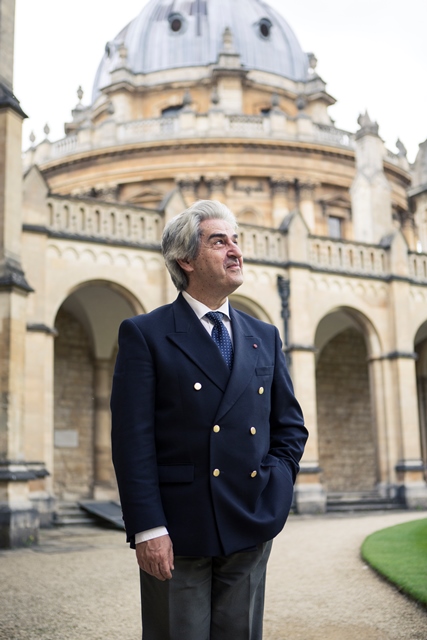 More in this category: « B. Coronakis: "The European Union Must Survive..." Let's be S.M.A.R.T. animal welfare org invites all to Charity KARAOKE Event »