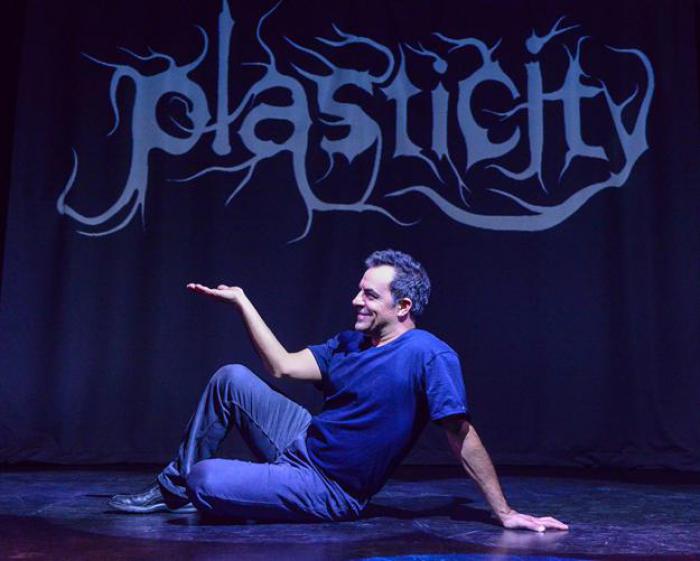 Plasticity, an innovative multimedia production, written by Alex Lyras and Robert McCaskill, played Off Broadway for a limited five-week engagement at the Greenwich House Theater. The play was inspired by actual events concerning a man’s miraculous recovery from lifeless coma to full-blown consciousness.

The production relies on cutting-edge neuroscience to unpack the mysteries of the brain, while simultaneously exploring the life or death decisions one family faces with a loved one in critical condition. Seamlessly combining artfully stylized projections of the patient’s primal memories, with heightened, at time poetic language, and much needed comedic relief, the play offers a much needed fresh perspective on a potentially tragic, and ultimately triumphant scenario.

The narrative turns on the conflicting motives of myriad personalities in the patient’s life. His twin brother and fiancé battle each other, and themselves, over grave end-of-life issues, in order to protect the one they love. The story presents the ugly reality of contradicting medical advice, sky rocketing hospital costs, and how insurance companies evade their fiscal responsibilities without a lick of compassion. The plot escalates at a feverish pace, revealing unexpected twists on the way to a surprising climax.

The show brilliantly portrays a complex cast of characters, all performed by Lyras, and skillfully directed by McCaskill, who successfully balances the story between text and visual effects. Projections are layered over a scrim, in front of the actor, and a cyclorama movie screen behind him, to create immersive environments seldom seen in the theater. Lyras manages to transition from role to role so smoothly that the observer soon forgets it’s one actor on stage. His interaction with hologram-like projections of competing doctors and hospital staff creates two and three person scenes, literally out of thin air. Lyras energy rivals the legendary Robin Williams, while the depth of detail in McCaskill and Lyras’ script, evokes a comparison to the work of Anna Deveare Smith.

Plasticity premiered at the Hudson Theater in Los Angeles and received Ovation and LAScenie Awards. As a writing team, Lyras and McCaskill, have sold TV pilots to NBC, FOX and Warner Brothers, developed an action comedy for Bruckheimer TV and a drama for Joel Silver.

Alex Lyras is a second generation Greek-American writer born and raised in New York. His family hails from the island of Xios.

More in this category: « Let's be S.M.A.R.T. animal welfare org invites all to Charity KARAOKE Event Coloring Books and On-Line Courses during COVID 19 »