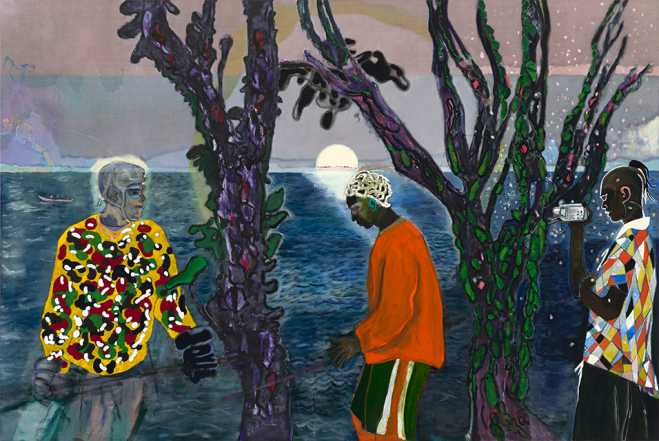 The Metropolitan Museum of Art has announced the acquisition of Peter Doig's monumental landscape painting Two Trees (2017), a gift from George Economou in celebration of The Met's upcoming 150th anniversary, in 2020.

Doig's large-scale landscape Two Trees is set against a backdrop replete with layers of allusions to old master painting. The two trees in the frame depict a real view from the artist's hillside home on Trinidad, the Caribbean island where he spent his childhood and to which he returned to live in the early 2000s. Doig has spoken about how his view east across the sea towards Africa also reminds him of the journey that so many of the islanders' forebears were forced to endure in the brutal Middle Passage across the Atlantic. Trinidad's rich Creole traditions are also deeply informed by that forced migration. Even as Doig's three figures carry with them a sense of menace, they seem to mirror that cultural hybridity as well as the artist's own immigrant position.

Sheena Wagstaff, Leonard A. Lauder Chairman of Modern and Contemporary Art, commented, "Peter Doig is one of the most important figurative painters of our time. Two Trees is a masterpiece, as well as a watershed work in the artist's oeuvre. It poses provocative questions about modern life, even as it sits within a lineage of peers such as Goya or Munch, who also touched on the rawness of contemporary life with distinctive painterly invention and strange beauty. We are very thankful to George Economou for his outstanding generosity and to Peter himself for his passion and support."

"I am very pleased that Two Trees will now be part of the extraordinary collection at The Metropolitan Museum of Art," said the artist. "The painting is a significant addition to The Met's holdings and will resonate with the institution's contemporary and historic paintings."

Peter Doig was born in 1959 in Edinburgh and raised in Trinidad and Canada before moving to London in 1979 to study painting. The artist currently lives and works in Trinidad. His work has been the subject of numerous exhibitions, including recent solo exhibitions at Tate Britain (2008), Dallas Museum of Art (2005), and Pinakothek der Moderne, Munich (2004). His work is represented in many national and international collections. This is the first major work by Doig to enter The Met collection.

George Economou was born in Athens, Greece and is a graduate of the Massachusetts Institute of Technology (MIT). He began his career in shipping, expanded in offshore drilling and real estate, and has shared a passion for art throughout his career. His collecting activity began evolving in the 1990s with a focus on early twentieth-century European art and has grown to include an important holding of postwar and contemporary art. In 2012 he opened an exhibition space for the collection in the suburbs of Athens, Greece where he organizes several exhibitions per year and collaborates regularly with international institutions and curators. Also, Mr. Economou is a member of the Tate Foundation Board of Trustees and of the Dia Art Foundation Board of Trustees.