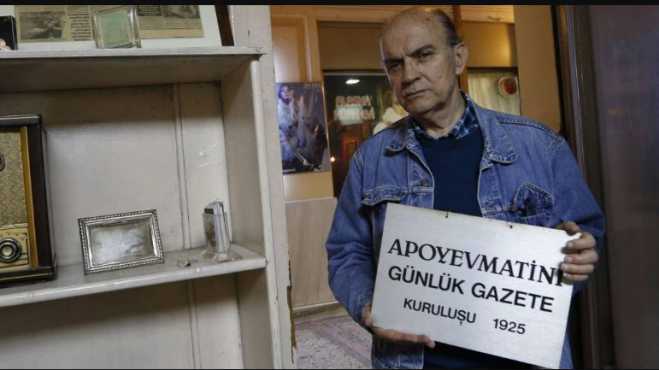 Launched in July 1925, Apoyevmatini (“Afternoon” in Greek) was the second newspaper in the newly established Republic of Turkey, after Turkish daily Cumhuriyet.

The paper caters to the city’s Greek community, known as Rûm.  Constantinople is home to some 600 Greek families, most of whom get a copy of the paper, according to publisher Michalis Vasiliadis.

Apoyevmatini covers the politics of Turkey and Greece and offers announcements of local christenings, graduations and obituaries. The paper launched an online version in 2007.

“We have people reading it in Australia, Canada, Brazil, Belgium, France, everywhere,” Vasiliadis’ son Minas, the paper’s editor-in-chief, told Politico. “We have some young Greek-Americans who, although they don’t speak very much Greek, they buy Apoyevmatini online to show it to their fathers who used to live in Istanbul.”

The Greek community isn’t the only one to show a fondness for the publication. When Apoyevmatini was on the verge of shutting down amid the financial crisis in 2010, the Turkish-speaking community jumped in to help.

Turkish researcher Efe Kerem Sözeri, an Ahval contributor, heard about the paper’s closing and launched a campaign that brought in 300 new subscribers, all of whom were Turkish and couldn’t even read the paper, according to Politico. “It was very touching,” said Minas.

Yet the paper’s future remains uncertain. The father and son now run the paper from home as they can no longer afford an office. The number of Greeks in Constantinople is dropping and press freedom in the country has “deteriorated rapidly” in recent years, according to the European Parliament. Still, Minas is determined to keep the publication alive. “I will do everything in my power. After all, Apoyevmatini is part of Istanbul’s cultural history,” he told Politico.