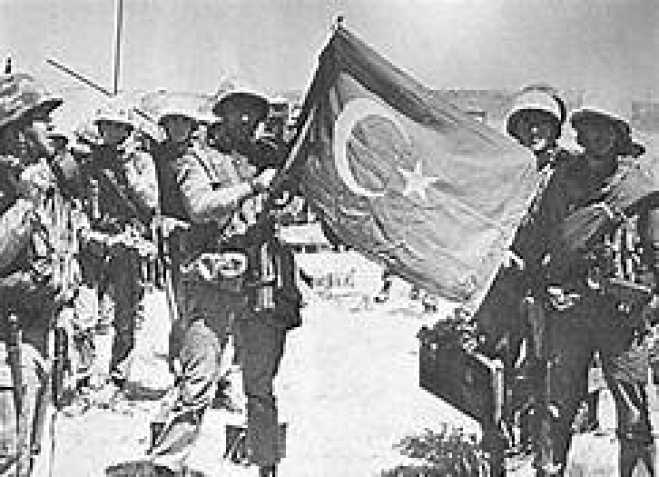 The American Hellenic Institute (AHI) remembers the solemn 45th anniversary of NATO member Turkey’s brutal invasion of the Republic of Cyprus, a member of the European Union.

For 45 years, the Republic of Cyprus, and its people, have endured an illegal occupation by 40,000 Turkish troops, and massive violations of human rights and fundamental freedoms by Turkey. AHI calls for the immediate removal of all Turkish troops that occupy the Republic of Cyprus. Also, during the occupation, Turkey continues to violate U.S. law on an ongoing basis by transferring American-made weapons from mainland Turkey to Turkish-occupied Cyprus.  Congress must put a stop to this illegal transfer of weapons or otherwise it is complicit in breaking its own laws.  Additionally, Turkey’s illegal occupation of Cyprus has had an impact upon The Committee on Missing Persons’s ability to access certain Turkish military installations on Cyprus to excavate the remains of Cypriots missing since the tragic events that occurred on the island for proper identification.  Approximately 926 Greek Cypriots, including four American citizens, remain missing and a large majority of these cases remain unresolved.

Turkey’s threats and acts of aggression toward Cyprus continue to this very day.  They are unacceptable and clearly demonstrate Turkey is a force of instability in the Eastern Mediterranean.  In addition to the Turkish troops illegally occupying the Republic of Cyprus, the presence in Cyprus’ Exclusive Economic Zone (EEZ) of two Turkish drill ships and one seismic research vessel (with a second one on its way), which are accompanied by Turkish naval vessels, is a violation of Cyprus’ sovereignty and international law.  Cypriot President Nicos Anastasiades termed Turkey’s bid to drill a “second invasion.”

The U.S. must publicly state that Turkey must remove its troops from Cyprus.  The withdrawal of Turkish troops would be a significant confidence building measure in the peace process. As such, any positive resolution cannot be foreseen until United States policymakers press Turkey to forgo its intransigence, which was on full display at 2017’s Conference on Cyprus in Crans-Montana, Switzerland. There, Turkey’s insistence to maintain the Treaty of Guarantee, which would allow for future unilateral Turkish military interventions, was completely unacceptable and contradicted the governing principals of a European Union member state. AHI maintains the Cypriots themselves should have ownership of the settlement process and the solution should be by the Cypriot people for the Cypriot people. Advancing these positions will underscore support for the rule of law and respect for international law.  It will demonstrate the United States’ dedication to solving the Cyprus problem.

Moreover, this is not the Cyprus of 45 years ago.  Cyprus has made tremendous strides and is viewed today by the United States as a strategic partner because of its commitment to counterterrorism and security as evidenced by 2018’s Statement of Intent agreement with the United States.  Cyprus is a signatory to the United States’ Proliferation Security Initiative.  Cyprus also has strengthened relations with Israel, bilaterally, and as part of the trilateral partnership with Greece; a partnership that recently included the participation of the United States at the Sixth Trilateral Summit held in March 2019.  Turkey’s aggression in Cyprus’ EEZ and its gunboat diplomacy only serve to hinder Cyprus’s further development as key contributor to security in the Eastern Mediterranean, the broader region, and Europe. Therefore, in the context of the United States’ enhanced relations with the Republic of Cyprus and as a participant at the Sixth Trilateral Summit, AHI calls on the United States to condemn strongly Turkey’s illegal drilling activities in Cyprus’ EEZ, and further, place sanctions upon Turkey for such illegal activities.

On July 20, 1974, Turkey invaded the Republic of Cyprus with the illegal use of U.S.-supplied arms and equipment in violation of the U.S. Foreign Assistance Act of 1961, the United Nations Charter, the NATO Treaty, and customary international law. Turkey occupied about four percent of Cyprus during the initial phase of its invasion. Furthermore, on August 14, 1974, three weeks after the legitimate government of Cyprus was restored, Turkey launched the second phase of its invasion of Cyprus, grabbing 37 percent of Cyprus’s sovereign territory, killed innocent civilians, forced 170,000 Greek Cypriots from their homes and properties, and committed mass destruction of Cyprus’ cultural and religious heritage, including an estimated 500 churches and religious sites belonging to Christian and Jewish communities.

Since 1974, AHI has advocated the U.S. government must: