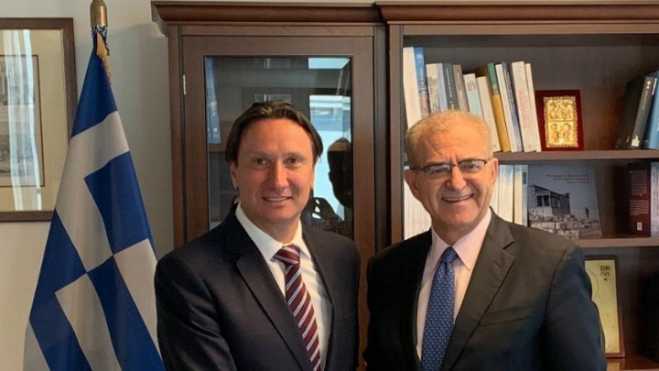 Deputy Foreign Affairs Minister for Expatriate Greeks Antonis Diamataris on Wednesday assured the President of the Melbourne Greek Community Vasilis Papastergiadis that the Greek state will make every effort to support Greeks throughout Australia, in a meeting at the Ministry of Foreign Affairs in Athens.

Diamataris stressed that expatriation is a government priority and asked to be briefed on the important issues facing Melbourne's expatriates, particularly in the field of education, such as potential teacher transfers from Greece, the activation of student hospitality programs in Greece, as well as school textbooks and distance learning.Papastergiadis briefed minister Diamataris on Melbourne's Greek community, the second oldest Greek Diaspora hub, with 300,000 residents of Greek descent, which is also considered the third largest Greek-speaking city in the world, after Athens and Thessaloniki. He said the Greek community operates schools of Greek language and culture in various suburbs of Melbourne and the Alphington Grammar College, with more than 2,500 students in total, and supports five Greek Orthodox churches. The community also hosts some of the biggest festivals in Australia, such as the Lonsteel Greek Festival in downtown Melbourne, which attracts more than 120,000 visitors and the annual Greek Film Festival.In 2014 the construction of a 15-storey new community building in central Melbourne, which houses the Hellenic Center for Contemporary Culture, has become the largest of the Greek diaspora, with tens of thousands of visits every year. The Center's multifaceted actions also include lectures, modern Greek and ancient Greek language courses, awards for students of Greek descent and more.