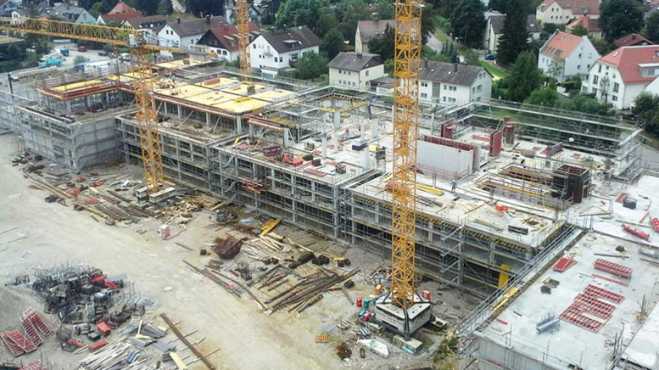 With the demolition of the skeleton of the building the last act of drama in the saga of what was to be the new Greek school in Munich has begun.

Starting today the municipality of the Bavarian capital begins the demolition of the unfinished building, which will be completed shortly before Christmas. It was preceded by a tug of war between the Hellenic Republic and the City of Munich, which lasted for almost 20 years, and ultimately harmed Greece and especially the Greek-language education and the Hellenism of Munich.

The unfavorable development is due to a number of factors, with the responsibility being weighed on both sides in the first place, but the balance still ultimately falling on Greece. The obvious indifference shown in the last decade by all Greek governments in the face of the economic crisis, which undoubtedly played an important role, led to the loss of not only the land but also the dream of a privately owned school.

The 15-acre plot where the new Greek school was to be built was purchased by Greece in 2001, but objections and appeals by residents have delayed the start of construction work. The first planning permit was finally issued in 2008, seven years after the land was purchased. Since the relevant four-year deadline was not met by the Greek side, the municipality of Munich also activated the return clause (!) provided for in the 2001 agreement and so on to meet its own increased housing needs (!) Since 2013 the city was formally entitled to the return of the plot.

At that time, the Greek side woke up and started work on the plot but was limited to the foundations. The out-of-court settlement of 2015 led to new deadlines which - despite clear warnings from judges about the risk of losing the plot - were not met again by the Greek side. In 2016, the plot was formally returned to the City of Munich. The ensuing litigation eventually led to a compromise settlement in the spring of 2019: Greece withdrew definitively in return for claiming the land remaining in the Munich municipality, and the German side undertook to build a German high school and a Greek school that will house 500 Greek students in total.

In fact, the Greek side is left without a plot and will lease for a long time the school building that the municipality of Munich will build while it could have already been operating its own school unit, which would have more capacity and could accommodate a larger number of Greek students. The privately owned unit planned to relocate six of the seven Greek schools currently operating in Munich, which, according to information from the Parents Association, cost the Greek state 200,000 euros a month. In part, however, they are subsidized by the State of Bavaria.

Tragic irony: the demolition of the skeleton of the new Greek school coincides with a major celebration of Greek-language education: Munich Hellenism celebrates the 50th anniversary of the city's first Greek school in 1969 this year.