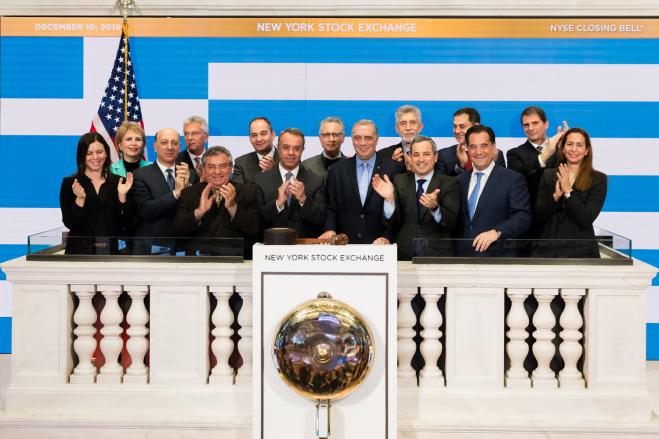 Within the context of the 21st Annual Capital Link Invest in Greece Forum the New York Stock Exchange in cooperation with Capital Link organized a special ceremony in honor of Greece entitled "Greek American Issuer Day at NYSE".

Chris Taylor, VP of Listings, NYSE - The New York Stock Exchange welcomed the Greek Delegation and the listed companies and highlighted the long standing relationship between the New York Stock Exchange and the Greek and Greek-American business communities.The active support and participation of NYSE, the world's largest stock exchange, enhances the prestige and the visibility of the Forum and of Greece to a wider international investment audience. It also shows the stable support of NYSE to Greece, the Greek companies, the Greek shipping industry and the Greek American Diaspora. The US Capital Markets are a major source of capital for a growing number of companies of Greek interest and the New York Stock Exchange is playing a leading role in this.The event was broadcasted live on major news stations in the United States and abroad to an estimated audience of 150 million viewers worldwide.