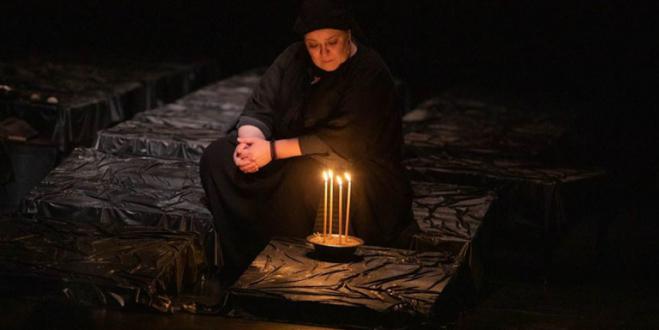 Katerina Berdeca's rendition of the "Lady of Ro" was presented with great success at the Freud Playhouse, UCLA in Los Angeles.

The show was applauded and hosted by most media outlets while story charmed and thrilled the audience.

The play "The Lady of Ro" by Yannis Skaragas, directed by Katerina Berdeca and performed by Fotine Baxevanis premiered in October 2017 at the Sfendoni Theater and has since received a thrilling reception from audiences and critics alike, in most of mainland and island Greece, in Cyprus, Australia and America.

Performance for the heroic figure of Castellorizo
The text is inspired by the heroic figure of the Lady of Ro, the world-famous Despina Achladiotis, and focuses on the portrait of a free and relentless woman. It is a story about Kastellorizo's long-awaited story, the tragic backdrop of successive wars, the despair and pensive thoughts of a woman confronted with the elements of nature and her hope that her faith in humanity can make the world better .

The play "The Lady of Ro" by Yannis Skaraga, directed by Katerina Berdeca and performed by Fotini Baxevanis has performed with great success in Greece and abroad.

The Lady of Ro raises the Greek flag daily on the island of Ro, symbolizing the part of the Greek soul that draws strength from the few. Isolated and confronted with adverse conditions, it becomes the most timely and meaningful symbol of a country returning to its basic principles, restoring humanity and its needs to the center of its history. It embodies the power of the helpless person, and especially the hope that, in difficult times, integrity and solutions are not the issue of many but of everyone individually.

The show in America was organized by CAP UCLA in collaboration with UCLA STAVROS NIARHOS FOUNDATION, under the auspices of the Hellenic Ministry of Foreign Affairs' General Secretariat for Overseas Hellenism and sponsored by Deborah Irmas, Tina and George Kolovos, Daphne Valentina, and the Office of the Dean of Humanities and is the second Greek production to receive an official invitation from UCLA's renowned Center for the Art of Performance in Los Angeles after Dimitris Papaioannou's performance of "The Great Tamer" to join the schedule for the 2019-2020 season.