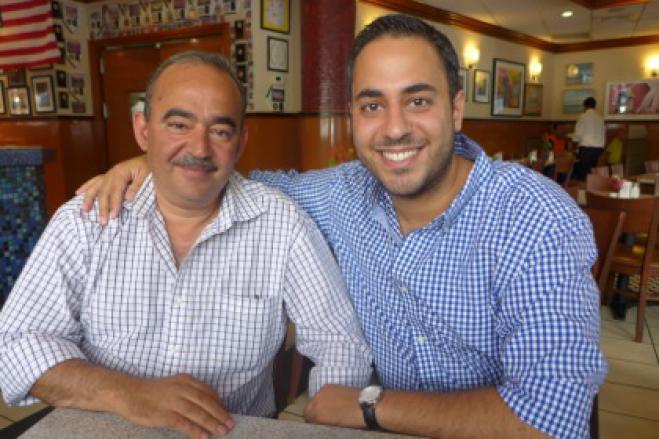 Andreas Koutsoudakis, who ran Tribeca’s Kitchen and for decades previously also owned and operated Gee Whiz, died yesterday after contracting the coronavirus — just two weeks after closing the restaurant to protect his clients and staff from the virus. He was known as Andy to much of the neighborhood, where his reputation as a warm and gracious host, as well as his open and friendly nature, made him a real presence in Tribeca.

His family has posted a moving tribute in pictures (below) and in words on Facebook, written by his son Andreas Koutsoudakis Jr., who co-owned Tribeca’s Kitchen with him.

“Mommy and I want you to know we miss you dearly,” Andreas Jr. wrote. “You sacrificed your life for us until the end of your time on earth. It feels like a bad dream and that you’re just on a fishing trip with your fishing buddies, out at sea with no reception, but that you’ll be calling on your way home to tell us how much fish you all caught and then come distribute every last fish to friends and family. That’s what you did with everything. You gave every last ounce in you to whatever you touched.”

Andreas leaves behind his wife, Vanna; his daughter-in-law, Alexia; two granddaughters, Vanna and Zoe; as well as three sisters and their families. He and his original business partner, Peter Panayiotou, opened Gee Whiz in 1989, and it became a Tribeca institution, sponsoring hundreds of little league and soccer teams (it was a point of pride for neighborhood kids to find their team picture on the wall), providing food for countless fundraisers for local organizations — especially those for PS 234 — and hosting thousands of families’ milestones — birthdays, graduations, holiday meals, Sunday dinners.

“Whether it was work, family, friends, good times, bad times. You were always all in. You made the hard decisions, you were scared of nothing, and you loved life and the world,” his son wrote. “[We all will] remember your smile, which I will do my best to carry on and be the best version of you I can be. I have always strived to be exactly that, and it has worked out great, so I know following in your footsteps was always your plan for me before yesterday and after.”

While the family said flowers would have been appreciated, they are sure that Andreas would prefer that any money spent would go toward something that will help others. So instead they are asking that donations be made to a GoFundMe campaign, where the funds will be used to supply protective gowns and masks for doctors, nurses and first responders at Richmond County Medical Center in Staten Island. “It is no secret that these are our ‘soldiers’ and our armed forces are fighting this invisible enemy without the supplies they need to win this war. We are raising money to buy and provide these great men and women the protection and supplies they need in the tireless effort to treat very sick people like my dad.”

The restaurateur left the Greek island of Crete at the age of 14 to move to the United States, opening Tribeca’s Gee Whiz diner in 1989 along with his business partner, Peter Panayilotou. He sold the diner in 2015, just a year after he opened Tribeca’s Kitchen, on Church Street near Duane Street. “He was an old-school New Yorker, with a deep commitment to family, love and community,” a statement from the NYC Hospitality Alliance reads. “He was a roll-up your sleeves type of worker.”

Tribeca’s Kitchen was a favorite among NYC politicians, and several mourned his loss on