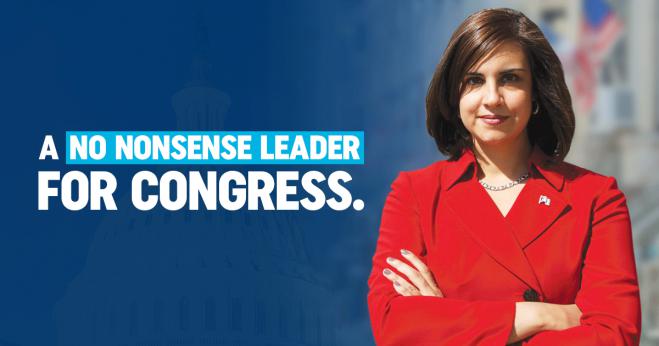 Assemblywoman Nicole Malliotakis, the Republican and Conservative Party candidate for New York's 11th Congressional District (Staten Island-Southern Brooklyn) declared victory in tonight's Republican Primary.
Speaking before supporters at GOP Headquarters in Staten Island, Assemblywoman Malliotakis delivered the following remarks:
WHAT A VICTORY!
I'd like to thank Chairman Lantry for his kind introduction and heartfelt support as well as the Brooklyn GOP Chair, Ted Ghora and their counterparts in the Conservative Party...Staten Island Chair David Mario Curcio and Brooklyn Chair Fran Vella Marrone and of course the Conservative Party State Chair Jerry Kassar.... as well as my staff...the volunteers and most importantly every Republicans who cast their vote today.
America is in crisis....we are emerging from a deadly pandemic that has taken the lives of way too many New Yorkers and Americans. It has devastated the economy, put over 40 million Americans on the unemployment rolls and has changed the way we live our lives.
We are facing a time of unprecedented civil unrest with rioters and looters in our streets and radical leftists and anarchists toppling historic statues and laying siege to the White House.
We can sit back and watch silently as all we cherish is torn down or we can stand shoulder to shoulder and fight back against the Socialist Agenda that is sweeping this land.
The question I'm asking tonight is will you stand with me and join in that fight?
As most of you know....I am a first generation American whose father emigrated from Greece for a better life and whose mother fled Cuba as teenager to escape the clutch of communism when Fidel Castro seized power.
Ronald Reagan warned us that "Freedom is never more than one generation away from extinction." And guess what; he was right.
Over his first 18 months in office, Max Rose has turned his back on the promises he made and the beliefs of the majority of his constituents.
Two years ago....he claimed to be a moderate Democrat who would act independently of House Speaker Nancy Pelosi...but, once elected he proved to be just another liberal Democrat voting with her over 95% of the time.
Over those 18 months he joined with the left to help stall the America-Mexico-Canada trade agreement.
He voted to release convicts from federal prisons, to use our tax dollars to fund political campaigns......and most importantly he cast his vote with Jerry Nadler...Adam Schiff ...and AOC to impeach our President Donald Trump.
The time has come my friends to send Max Rose packing and make him a One Term Wonder, like other Democrats who have held this seat.
For the past 10 years I have represented Staten Island and South Brooklyn in the New York State Assembly and have fought against the liberals who now rule this city and state.....I have fought against high taxes and bad schools.....against bail reform and Sanctuary City polices that protect criminals here illegally....I sued the Port Authority to achieve transparency, and took on the MTA, too. I stood up to Bill de Blasio and against his plans for heroin injection centers in our neighborhoods and we got him to agree to deport illegal immigrants who committed sex crimes....and I've fought for the hard-working....tax-paying..law abiding New Yorkers that the liberal Democrats hold in contempt.
I will continue that fight in Washington....and you have my word the I will stand on the floor of the House Chambers and vote for common sense solutions to the problems that vex us today.
I will stand with President Trump....Leader McCarthy and all who cherish our freedom as we battle the creep of Socialism and fight to Make America Great Again!
Thank you and God Bless America!
Tagged under