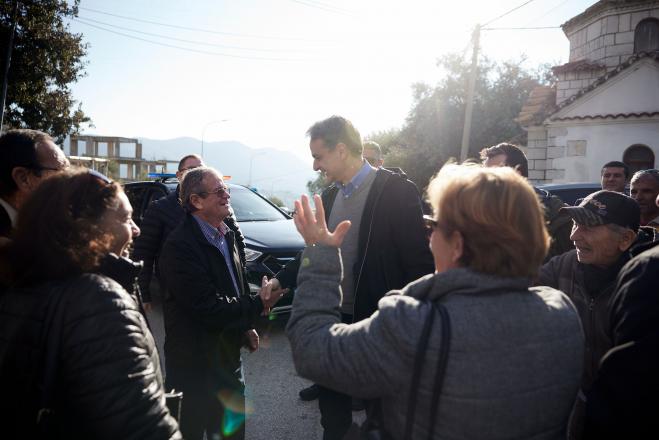 In an atmosphere of intense emotional charge, Prime Minister Kyriakos Mitsotakis addressed a greeting to members of the Greek ethnic minority who gave him an enthusiastic welcome on the beach of Heimarra.

To the sound of the slogans "Greece Greece don't forget us", Mr. Mitsotakis, visibly moved, emphasized that he feels very honored to be the first Greek Prime Minister to visit Heimarra.

And I believe that in the spirit of cooperation and friendship with the Albanian Government, all these issues can and will be resolved, I personally guarantee it to you.

The prime minister is accompanied to the villages of the Greek minority in Albania by Olympic gold medalist Pyrros Dimas, who visibly moved and spoke of a historic day and said characteristically: "I would come from the other side of the world, I wouldn't miss it for anything". "Today is a special moment for me"

"Today is a special moment for me, but I believe it is also a great moment for Hellenism all over the world. I still vividly remember the visit that Konstantinos Mitsotakis made here, to these lands, in 1991. I am sure that some of you were there. And I feel very honored to be the first Greek Prime Minister to visit Heimarra.

I want to say a big thank you for holding on in very difficult years, and I'm referring especially to the older of you, for keeping the flame of Hellenism and Orthodoxy in your heart unquenchable", noted the Prime Minister while speaking to the residents.

He then emphasized that Greece has left behind the great adventures of the past decade.

"It is a stronger, more economically developing country. And the better our Greece is doing, the better things will be for you. And this path we have carved out, for a strong Greece with self-confidence in Europe, we will walk it and we will walk it together. I want to tell you how moved I was when I had the opportunity to visit your school today, when I saw the young children from kindergarten to 3rd grade learning Greek, Albanian, English.

They are the next generation of children who must stay in their country, to have opportunities, to have good jobs, and as long as Albania suffers, these children will also suffer with it. And we are here to help in this advance of Hellenism. "Greece is growing, growing and getting stronger," underlined Kyriakos Mitsotakis.

The Greek school Omiros was the first stop of Prime Minister Kyriakos Mitsotakis' visit to Heimarra, with Olympic gold medalist Pyrros Dimas accompanying the Prime Minister to one of the oldest schools in the region.

In a historically important visit, the prime minister will be in the villages of the Greek minority in Albania, in the geographical area of Northern Epirus, namely in Heimarra, Livadeia (Finiki) and Dervitsani (Dropoli) from Thursday morning.

Mitsotakis' goal is to talk to residents in order to listen to their problems and convey to them the support of the Greek state.

Afterwards, Mr. Mitsotakis will have a meeting with members and representatives of the Greek National Minority in Albania.

On behalf of the Albanian government, the Prime Minister will be welcomed in Dervitsani by his Albanian counterpart Edi Rama, while in Livadia the Minister of Environment and Tourism, Mirela Koumbaro.

In the recent meeting between Mitsotakis and Rama, not only the issues of the Greek ethnic minority, but also the issue of the demarcation of maritime zones were put on the discussion table. "I believe we are close to making progress and resolving the issue," Mitsotakis had said about the EEZ. "We are approaching the time when we will sign the relevant co-promissory note for the petition  tendered to the international court in The Hague", he noted, even though he spoke of discussions with complexities.

But he had deliberately spoken of "progress" in an issue which goes back many years but also froze again after the last agreement (in October 2020) on the Hague perspective.