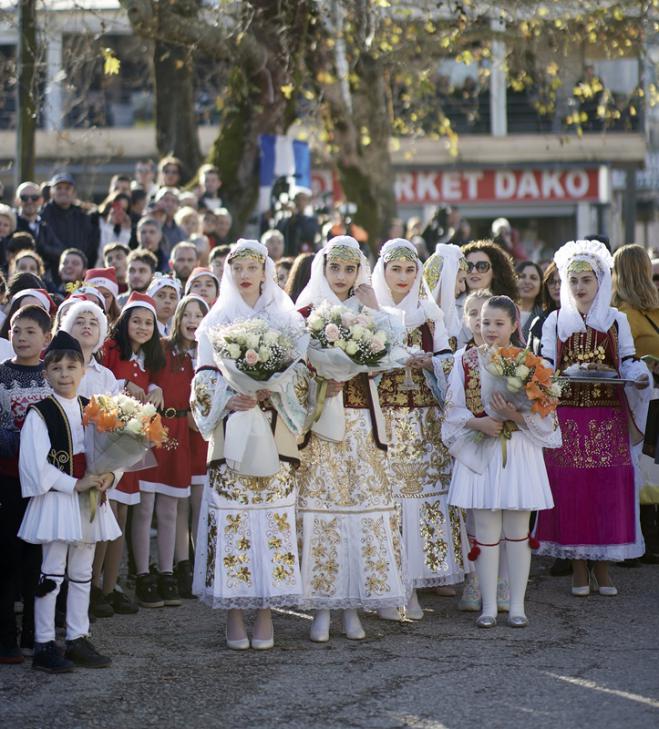 Prime Minister Kyriakos Mitsotakis pledged to do whatever he can to resolve issues of the Greek ethnic minority in Albania while visiting Derviçan on Thursday.

This is the first visit of a Greek prime minister to southern Albania, home of the Greek ethnic minority, since his father Constantine visited as prime minister in 1991.

In a scheduled one-day visit, the Greek PM said that he had a very close collaboration with Albanian PM Edi Rama - who welcomed him at the city's sports field - and quoted his father as saying that "the Greek ethnic minority is a bridge of friendship between the two countries," adding to it that "what was true 31 years ago still holds true today."

Speaking of Greek-Albanian relations, he told the gathered residents, "I want you to know that with Prime Minister Edi Rama we have a very close working relationship. We know the issues that concern you. I believe we can set them on the way to resolving them in a spirit of collaboration and in a spirit of goodwill. You are also aware of the support the Greek state has provided throughout the years to all Greeks living in your municipality - this you should take as a given."

The visiting premier also said that the financial supplement provided to uninsured aged people was finally being resolved, as is the support for children studying at Greek schools, where they are taught three languages - Greek, Albanian, and English. "We want to work together with these children, so they can stay at their homeland, to prosper in their own country. And as Albania prospers, so will the Greek ethnic commmunity prosper."

In addition, he reiterated his support for Albania's future accession to the European Union, adding there are extensive opportunities for improving bilateral relations in the economy and in infrastructure.

Prime Minister Rama thanked the residents for "the wonderful welcome" and noted that "for us, the minority is an irreplaceable bridge of the unviolable connection between our two countries, and I want to hail with great gratitude all of those citizens of the Republic of Albania with Greek citizenship, like you, who have contributed much, not just to this community, but to the country overall."

Rama referred to the elder Mitsotakis' visit to the region and the emotional significance of being there as a non-member of the minority, to highlight the presence of the current prime minister to the region and the communities. "There have never been this many people gathering here for me, you should know this. But we have a common element, that in our land we consider you, in the same way, both friend and brother."

Also welcoming the Greek PM were Ministers of Tourism and the Environment Mirela Kumbaro and of Agricultural Development Frida Krifca, along with the mayor of Derviçan, Dimitris Tollis, who said the Greek ethnic community members "are the natural supporters and protectors of Greece and Albania's common European course."

Rama and Tollis said the Dervican square would be named after Constantine Mitsotakis and would include a bust of the late politician, while Mitsotakis said he would attend the related ceremony.

Following the square, the two leaders visited the local school and the Orthodox Church of the Virgin's Dormition.

Prior to Derviçan, Mitsotakis had visited the minorities of Himare and Livadhja.

Mitsotakis had paid a visit to Tirana for the EU-Western Balkans summit, where he and Rama met on the sidelines, while Foreign Affairs Minister Nikos Dendias was on an official visit to Albania on Wednesday and attended a luncheon in his honor by Rama.