There are so many reasons to visit Greece, however, other than the ancient sites and cultural history, the amazing site seeing of nature, the beaches and the lifestyle, there is a special tourism attraction, the Christian religion. Greece was one of the first cradles of Christianity and the prevailing religion in Greece is the Orthodox Christian faith. As part of the Byzantine Empire, Greece established Christianity as the country's official religion in 380 AD. It is closely tied to the nation's identity due to the large contribution in the preservation of the Greek language, literature and arts during the Ottoman Empire. This resulted to a very rich religious tradition, with an impressive variety of local customs in major celebrations that add even more spirituality, mystery and meaning.

When traveling in Greece during Greek Orthodox Easter, if given the opportunity, visit Corfu, Patmos, Monemvasia or Leonidio to truly experience this special time. The positive festive environment is overwhelming, and the local traditions are truly meaningful.

Greece also celebrates the Assumption of the Virgin Mary on August 15th, and many people visit Tinos and Veroia where the traditions are especially celebrated. You should definitely attend one of the many urban festivals known as "panigiria" that has performances with traditional music and dances as well as food and drinks, where you will also have the opportunity to socialize with the locals. 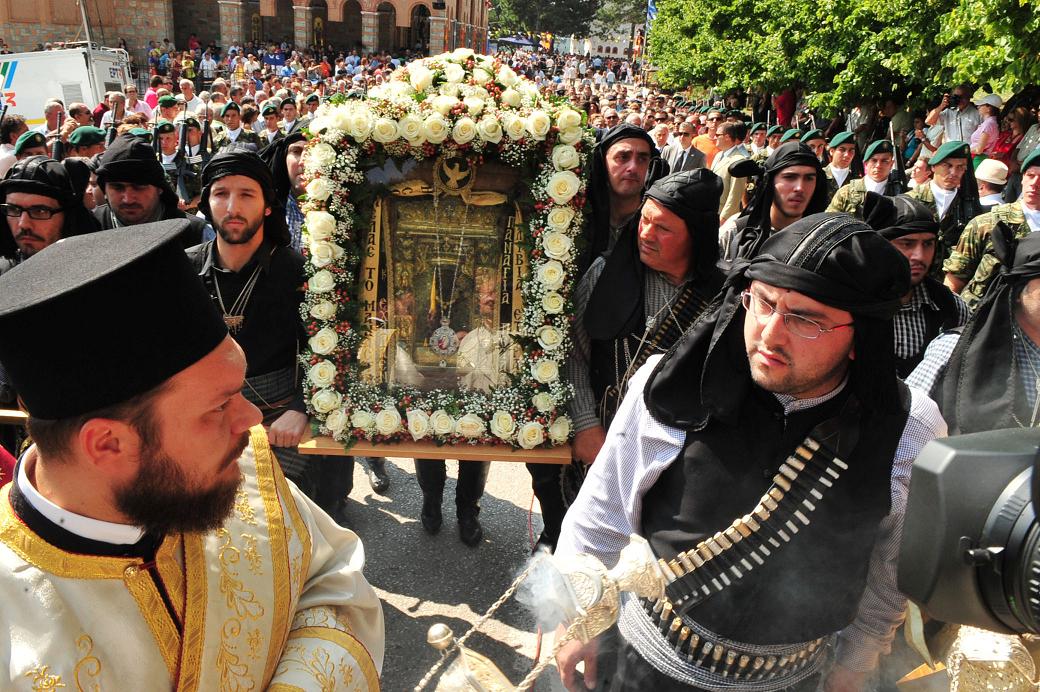 There are thousands of churches and monasteries throughout the country, many of which are majestic and stunning in beauty, thus making Greece a very popular destination for pilgrims.

Religious tourism in Greece offers so much, you will not only visit churches and monasteries, but should also visit the ancient site of Areopagus at the foot of the Acropolis in Athens, where St.Paul preached Christianity to the Greek intellectuals. You will also have the opportunity to understand the deeper connection to the sites. Even if you don't plan to visit major sites, everywhere you go you will most probably come across little whitewashed chapels or charming traditional churches.

**Keep in mind that when visiting a church or monastery you should be somewhat decently dressed (beachwear or very revealing clothes are considered disrespectful).

Mount Athos, also known as the "Holy Mountain", Mount Athos is a peninsula in Chalkidiki, in northern Greece, dedicated entirely to religion, a location of extreme natural beauty and home to 20 monasteries, twelve sketes and numerous cells.

As history has it and a tradition of Athonite, the Blessed Virgin Mary was sailing with St. John the Evangelist to visit Lazarus in Cyprus when the wind blew them off their course and forced them to dock near the port of Klement. The Blessed Virgin Mary walked ashore and was taken by the wild natural beauty of the mountain and said to have blessed it and asked her son Jesus for it to be her garden, a voice was then heard saying; "Ἔστω ὁ τόπος οὖτος κλῆρος σὸς καὶ περιβόλαιον σὸν καὶ παράδεισος, ἔτι δὲ καὶ λιμὴν σωτήριος τῶν θελόντων σωθῆναι" (Translation: "Let this place be your inheritance and your garden, a paradise and a haven of salvation for those seeking to be saved") (Wikipedia). The mountain was dedicated as the garden of the Mother of God and women were not allowed to enter. 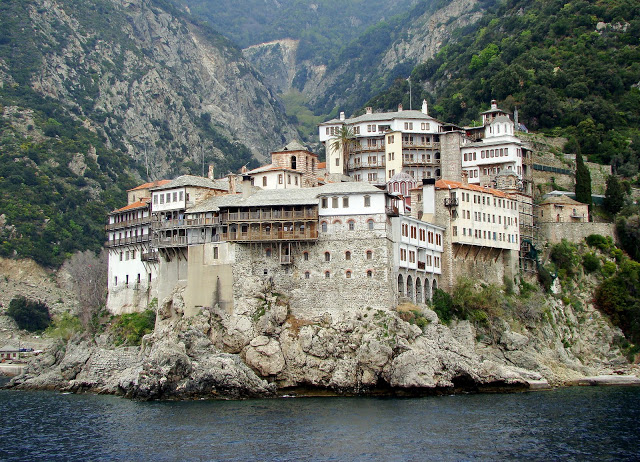 There is not much documentation on the ancient history of Mount Athos other than mention in the Iliad. Monks have inhabited the mountain since the fourth century during Constantine the Great's reign (324-337). A decree on the self-governed region of Mount Athos was passed in 1913 after the overthrow of Ottoman Occupation according to the international treaties of London, Bucharest, Neully, Sevres, and Lusanne, the decree stated that Mount Athos declared its territory as belonging to the Kingdom of Greece.

All monasteries are exquisite examples of Byzantine architecture and they possess invaluable medieval treasures of art and literature. Male pilgrims are welcome to stay and can be accommodated in the guesthouse, here they will experience the monastic life by following the monks' schedule.

If you are seeking a deep spiritual experience, Mount Athos may be an ideal destination. It is suggested that you chose to visit during spring or fall, as it's less crowded then, the weather conditions are milder and you'll get to witness its magnificent natural beauty at its best.

Note that entry is prohibited to women regardless of the purpose of their visit and there's a strict limit to visitors per day.

Built on impressive imposing pre-historic natural sandstone pillars in Thessaly, sit a complex of six monasteries surrounded by a breathtaking landscape of massive steep gray pinnacles that rise gloriously up to 400 meters above the ground.

The first inhabitants on the rocks were hermits climbed up in the stone pillars during the 9th century and lived in caves and hollows, before the monasteries were established in the 14th century. One can only admire the ascetic lives of the hermits and be overwhelmed by their religious commitment when visiting Meteora. 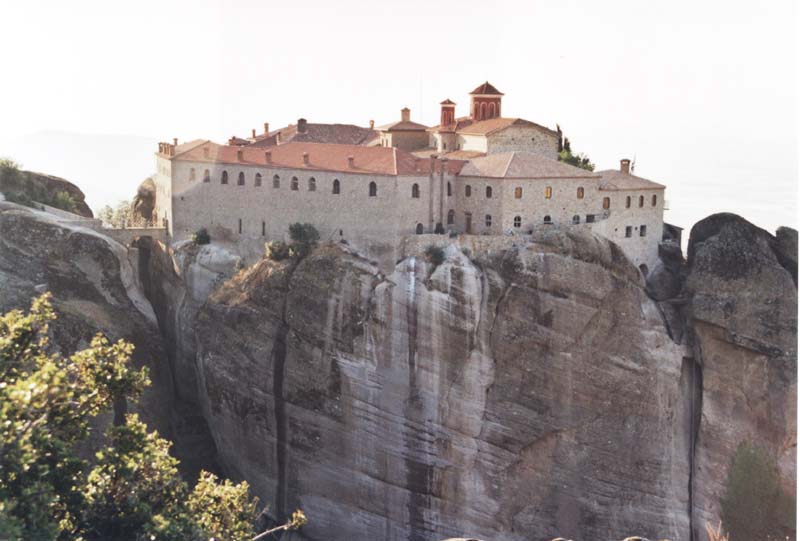 You are in for a treat if you are an athletic extreme sports enthusiast, as these rocks are one of the world's most spectacular rock climbing locations and also a unique way to really appreciate the accomplishment of the 9th century hermits who climbed up and built these monasteries.

Meteora is an all year around destination, however keep in mind that the weather is quite cold from December through March, most travellers visit from July through October. If you wish to comfortably explore the monasteries and the surrounding areas we suggest May and June for optimal weather conditions.

Patmos is a special small tranquil island located in the northern Dodecanese islands, it is world re-known as the island where St. John received the visions to write the Book of Revelation. The cave where St. John lived and the Monastery of St. John the Theologian, a fortified Orthodox Monastery is magnificant of major importance for the Christian faith. 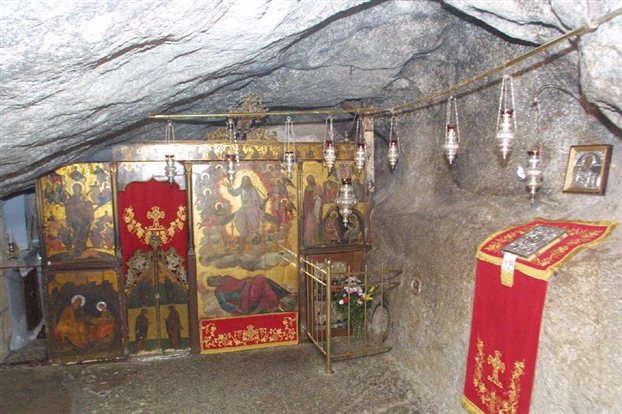 Though many visitors come every year, the island has remained blissfully unaltered, so it's guaranteed that you can enjoy a relaxing and spiritual holiday surrounded by peace and quiet. Keep in mind when planning your trip to Patmos, that the island is not high in population therefore it is quitter during the off -season months than the busier summer months.

Greece has so much to offer as a destination and religious tourism is one aspect of your magical trip to Greece that you will surely enjoy and cherish beautiful memories.