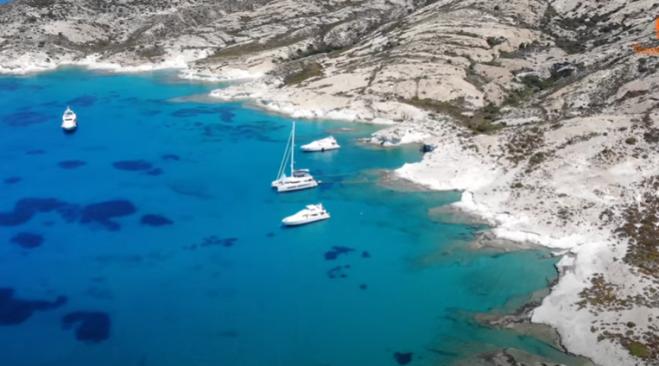 Polyaigos, also called "Polynesia of the Cyclades", is the largest uninhabited island in the Aegean and is considered the best-preserved island in the Mediterranean. It is part of the Natura 2000 program, designated as a Special Protection Zone, as it hosts a large number of rare endangered species of flora and fauna.

Located opposite Milos and Kimolos, along the imaginary volcanic arc of the southern Aegean, it could not "escape" from the volcanic activity that surrounds it. Its rocks create strange formations with impressive shades, while it is surrounded by beautifully carved rocks both on the surface of the sea and on land. There are also numerous caves that challenge you to explore them from end to end. As for the wonderful transparent water of the sea, it acquires a special shade, imitating the "psychology" of nature and the changes of the times and from intense blue it passes to dark gray or turquoise, depending on the peculiar color of the sky.

Many people may not be aware of the existence of Polyaigos, but its special "inhabitants" prefer it for the peace and quiet they enjoy undisturbed there. Many species of animals, reptiles, and birds, but also numerous ibex which in fact give the island its name (many - goats), are the owners of this lonely island. As for the Mediterranean seal Monachus Monachus, it has chosen Polyaigos to give birth to its young away from noisy people.

Unknown to many, but beautiful, unusual and serene, the exotic Polyaigos wins a place in the heart of the visitor and keeps it stable no matter how long he spends his visit to it.