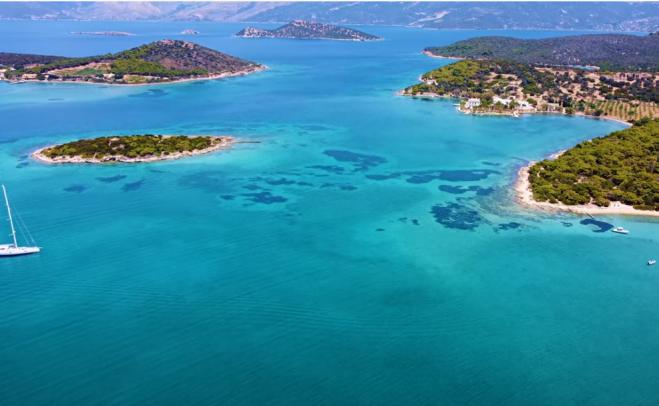 A short distance from Athens, in the waters of southern Evia, there is a complex of islands, ten to be exact, that can be easily compared with world-famous island complexes around the world, since the intense combination of colors of water and nature is real unique. Marinos Charampopoulos takes us on a tour.

As for their reputation ...
Petali belongs to Karystos and is located directly opposite Marmari. However, access is possible only by private means, since there is no ferry connection, at a time when most of the islands are private.

During the Turkish occupation, they belonged to Omar Pasha of Karystos and several years later they were given by the Greek state as a gift to Tsar Nicholas II. When Olga Konstantinovna, the Tsar's granddaughter, married George I and became queen of Greece, she sold her dowry to the shipowner Empirikos, to whose family still owns a large part of Petalia, as well as the second largest island of the complex. .

As for the larger island, known as Petalia, in the 80's, it passed into the ownership of the daughter of the great painter Pablo Picasso, Paloma, and her brother Claude, who with the seal of their personal style, transformed the former stables as well as the queen's country house, into a unique accommodation with "Tuscan" aroma.

Today, it belongs to the family of businessman George David, maintaining the parade of powerful names who were more or less found in this little paradise, and relaxed in the tranquility that offered them, both the facilities and the place itself, while enjoying the their dives in the incredible tropical waters of the complex.

Maria Callas, Greta Garbo, Rudolf Nureyev, Winston Churchill and many other celebrities around the world, turned the tiny Petalia into a VIP "neighborhood" that with its incredible colors has written and continues to write history.