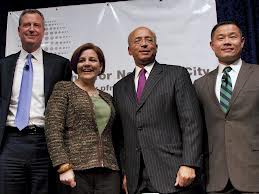 Just 48 hours to go before the primary election for Mayor and the leading candidates are in crunch time for the final phase of drama trying to get people to the polls to vote.

The candidates also face challenges in a city that has many major demographic shifts especially in the boroughs outside of Manhattan with the majority of New Yorkers now being nonwhite.

In a Democratic Majority city approximately 700,000 people are expected to cast their ballots. A candidate who can attract 40 percent of primary voters can move on to the general election.

Bill de Blasio's is an advocate of education to housing to the stop-and-frisk policing tactic, he said he would shift resources away from giving tax breaks to companies and into improving the City University of New York system and providing loans to small businesses. His staff consists of many veterans of President Obama's campaigns; his campaign has relied heavily on Facebook and Twitter to spread his message and has not spent his campaign budget money on the traditional mailings to voters.

Christine Quinn, an advocate against stop and frisk, wants alternative measures for student performances, re-vamp job development through high schools, and has a corporate regime run by veterans from Mayor Bloomberg's campaigns and approximately 2,000 interns from high schools and colleges.

William Thompson Jr. challenges de Blasio's stop and frisk stand and wants to reform it, is relying on the United Federation of Teachers, wants to appoint a chief jobs officer to improve coordination among "job-creation agencies." and relying on most of his votes from outside the boroughs of Manhattan.

John Katsimatides, is an advocate of stop and frisk and trade charter schools to create jobs, and wants to do something about the high cost of doing business in New York.

Joe Lhotta is a stong advocate of charter school expansion, stop and frisk and eliminating capital tax for corporations.

To add to the drama, lever voting machines have been brought out of storage for the primaries because the city cannot seem to use the electronic voting system efficiently.

Approximately 5,100 old machines have been maintained and the names of candidates from 2009 have been removed and replaced with this year's candidates. The lever machines that will be used on Tuesday were acquired in the 1960s and were replaced in 2010 with a $95 million electronic system that uses optical scanners to read paper ballots.

However, after long lines and polling scenes in 2012, as well as the inability to produce complete election results, the State Legislature authorized the return of the lever machines this year for the primary and any ensuing runoff, the city will however make the electronic machines work for the November general election.